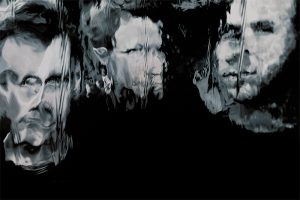 Building on the momentum of their self-titled 2014 debut 7-inch, Los Angeles post-rock band GUIDES push into new territory with their latest, a five-song EP entitled Abstract Mind.
With deep roots in a DIY aesthetic, every aspect of the EP was devised by the band themselves, with Guitarist/Vocalist Chris Cogswell, Drummer Jayson Larson and Bassist/vocalist Be Hussey building the tunes on the back of self-booked touring and tireless hours spent in Hussey’s independently owned recording studio comp-ny.
While the experimental melodies and dense walls of sonic texture that made up their 7-inch were a strong start, Abstract Mind hones in on those beginnings and takes them from esoteric explorations into blunt, perfectly articulated songs. A notably more in-depth eye on production results in unexpected blasts of shoegaze guitar somewhere between a dream and an attack on driving, restless tunes like “Long Face” and burning post-punk vibes of “Pictures On Pictures” that fall somewhere between the Pop Group and Lee Renaldo’s stream-of-consciousness contributions to Sonic Youth.
Layers of sonic fuzz toe the line between warm and dangerous throughout “Abstract Mind”, offering a beautiful and engaging struggle between melody and sharpness, with Cogswell’s dream-like lyrics complimenting the frenetic energy.
Ghettoblaster caught up with the band recently to discuss the EP and this is what they said about it.
When did you begin writing the material for Abstract Mind?
Chris Cogswell: Last summer… although some ideas were already being played at rehearsals. Actually, both “Midas Eye” and “Get Conceptual” were reworked from earlier GUIDES songs. So, it’s been all over the board.
Which of the songs on the EP is most different from your original concept for the song?
Jayson Larson: I’d have to say our single, “Pictures on Pictures.” I wasn’t even in the same state when that late night stream of conscious jam was birthed. Additions, subtractions, new lyrics… That song has really evolved. And obviously evolved enough for us to consider it as our single.
CC: We developed each song quite a bit. The GUIDES process usually starts with basic demos or the band just playing music and hitting the record button. We revise a lot. The short answer is ‘Get Conceptual’.
You’ve all spent some time in well-respected bands. Do you feel like you put any of those influences / experiences into what you’re doing now? Or is this a completely different beast?
Be Hussey: This is a completely different beast, but we all bring a bit of the past to the table. Mostly I use the past as an example of what not to do, and learning from past mistakes. Musically, I’m trying to boil down the best things and insert them into GUIDES.
CC: For me, this is the most dynamic, visceral, abstract, experimental and yet crafted band I’ve ever been in. Both Be and Jayson push me into musical territory I’ve never been in. It’s been very rewarding to see our different backgrounds contribute and form GUIDES.
JL: I’d like to think we all have taken away positive things from our past projects but those projects are definitely quite different from what we are doing now. For instance, I did a stint years ago in Death Cab For Cutie. Though there are obviously no musical similarities to GUIDES, one thing that impressed me was their business acumen and professionalism on the road.

You’ve got a 7-inch and EP under your belt now. Can we expect a full-length at some point?
BH: For sure, but I also feel like EPs are a good way to go as long as we’re DIY.
CC: Definitely. A GUIDES full length is on the horizon. 2016 should be the year. It’s going to be exciting to get back into the studio and break ground on it. I have a bunch of demos started. A lot that Be and Jayson haven’t heard yet. Looking forward to it… but, right now we’re pretty fired up to be playing and releasing our EP, Abstract Mind. These early live shows have been very high energy and very good times.
We’ve heard you referenced alongside bands like Sonic Youth and Pop Group. Would you call those bands inspirations?
JL: Most definitely. For me, certain so called post punk bands coming out of the ’80s and early ’90s were creating music that was not only experimental and dissonant, but also possessed wonderful musicality. Being able to cut through the fuzz and buzz with a melodic vocal or guitar line just tied it all together for me. Early albums from Dinosaur jr., Hüsker Dü, P.I.L., Mission of Burma, Unwound…Definite inspirations to me personally.
BH: Sonic Youth is/was one of my favorite bands, especially live. Their sound explorations and experimental nature have always been an influence. The Pop Group played a great set in LA this year and that was certainly inspiring.
CC: Yea, I don’t know why but last year I was pretty much obsessed with Sonic Youth. I was binge listening. Watching videos on-line, the whole deal. I’ve never seen them live. Before this last year, I had only listened to Daydream Nation and Experimental Jetset. I’d say that Jetset had the biggest influence on me in high school when I was just getting into being a songwriter and guitarist. I’ve never really considered what kind of influence they’ve had on me.  I guess Sonic Youth have this musical swagger about them that I’d probably wish I had more of, personally. And they have an experimental almost Sci-fi quality that I find super cool.
What are your touring plans for fall?
CC: We have a bunch of shows booked and more in the works. Right now it’s looking like we’ll be up and down the west coast. Some northwest shows too, can’t wait. I’m from the Seattle area, so getting GUIDES up there will be amazing.
(Catch GUIDES live here: 10.02 • The Balboa (San Diego, CA)
10.10 • B Ryders (Bakersfield, CA)
10.16 • Daytrotter Session (San Francisco, CA)
10.16 • Great Day Fresno – Fox 26 Live On-Air (Fresno, CA)
10.17 • Summer Sweat Block Party (Fresno, CA)
12.11 • Kelly’s Olympian (Portland, OR)
12.12 • Wandering Goat (Eugene, OR)
12.15 • Lowbrau (Sacramento, CA)
12.16 • El Rio (San Fransisco, CA))