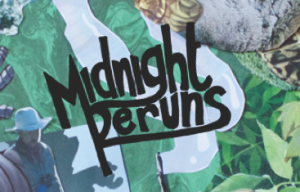 Rock n’ roll sometimes seems like a lost cause, slowly going the way of bell-bottoms and New Coke. However, once in a blue moon, a band like Midnight Reruns will come along and restore our faith in the cleansing power of guitars, drums, melody and of course, a good story. Their to-the-point self-titled debut LP out today on Good Land Records — is the manifestation of everything these guys hold dear when it comes to music.
Formed in 2010, they’ve developed a stage presence that could best be described as “aggressive slack” — not posing, not shoegazing, just throwing it down. They posses real working-class rock attitude that’s equal parts melody and driving double-guitar attack.
Ghettoblaster recently caught up with vocalist/guitarist Graham Hunt to discuss the LP.  This is what he said about it.
When did you begin writing the material for your most recent LP?
“Summer Smoker” was the first song I wrote for for the new LP.  I finished it almost exactly two years ago.  It took a while to compile enough material for a full-length album because up until May I played guitar in another band that was always on tour.
What was the most difficult song to take from the initial writing stage through recording and mixing?  Why was it so troublesome?
It took a while to get “Stop Lyin’ Down” just right.  Live we got the fuzz pedals on the whole time, but that wasn’t sounding right in the studio.  It also was tough to match up the intro with the rest of the song.  After we got some initial rough mixes back we decided it needed something else and recorded backup vocals for it in Brady and I’s attic.
Which of the songs on the record is most different from your original concept for the song?
When I wrote “Basement Guy” I immediately recorded a demo of it; listening back it sounds like a different song.  It was a Guided by Voices-esque oddball acoustic thing that kinda slowly chugged along and didn’t have a chorus yet.  When I brought it to the band, it ended up sounding like Thin Lizzy.
Did you have any guest musicians play or sing on the LP?
We went in the studio intent on not letting anyone else but us play on it.  We wanted it to be a representation of how we actually sound, and figured if we had any overdub ideas we were capable of playing them ourseves.  Our friend Tanner kinda stumbled in halfway through the session to hang out and ended up singing on the chorus to “Grand Slam” though.
Who produced the LP?  What input did that person have that changed the face of the LP?
Dan McMahon and Zach Staas engineered it.  Dan runs the Midwest Sound, the studio in Rockford we recorded in.  I wouldn’t say anyone really produced the record; Dan and Zach suggested the best way to budget our four days, hit record and let us do our thing.  Once in a while they’d throw out an idea, most notably suggesting that Sam use a drum kit owned by Bun E. Carlos.
Is there an overarching concept behind the new LP that ties the record together?
Having a concept was never an intention; we had a few songs and I booked studio time as a deadline for myself to get enough for an album.  However, for better or worse, at least half the songs ended up dealing with anxiety that comes with not being where you want to be, and thinking you’re not strong enough to change the situation.
Have you begun playing these songs live and which songs have elicited the strongest reaction from your fans?
We’ve been playing these songs live for more than a year and a half.  People seem to dig how we play “Signals from the Blue” live.  It’s much different from the recorded version.  It’s really loud.
(Visit Midnight Reruns here: https://www.facebook.com/MidnightReruns.)