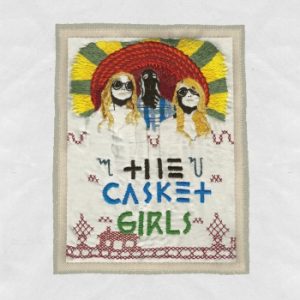 The Casket Girls, a three-piece band hailing from Savannah, GA comprised of Ryan Graveface (Black Moth Super Rainbow, The Marshmallow Ghosts, Dreamend) and newcomers, Elsa and Phaedra Greene made serious waves with their debut, Sleepwalking, came out in November and was well received for its dark, poppy and dreamy sensibilities.
Less than six months after The Casket Girls’ debut album, Sleepwalking, comes a brand new, five song self-titled EP due this Record Store Day (April 20). The songs pick up where they left off on Sleepwalking but there’s a sense of urgency that was not there previously. Perhaps a nod to the songs that will be on their second full-length album coming at the end of 2013.
Ghettoblaster caught up with vocalist Elsa Greene to discuss the EP.  This is what she said about it…
When did you begin writing the material for your most recent EP?
Some of the material on the EP was written at the very beginning of our collaboration. “Bloodstone” was the first song written in our band, while “Universal Language” was written very recently, so the EP sprawls and lounges across the bed of our existence.
What was the most difficult song to take from the initial writing stage through recording and mixing? Why was it so troublesome?
I wouldn’t say troublesome, as we have yet to run into trouble…well depending on your perspective I suppose…perhaps we have caused some trouble… Anyhow, “Shadow of a Shadow” was written in one of our initial writing sessions, but after touring and playing it live, the song took on a life of its own, so it was a challenge in a good way to reconcile it’s conception with its full grown self.
Did you have any guest musicians play or sing on the record? ?
TW Walsh played drums! He played drums on our debut album “Sleepwalking,” and we are somewhat married to not fixing the unbroken. He seems to be able to read our minds, though my sister, nor I have ever met him.
Who produced the record? What input did that person have that changed the face of the record?
I would say the record was self-produced. So it’s a fairly pure instinct from within. However, it was mixed by Andy LeMaster, and his vision really shaped the tone in a magical way. Though my sister nor I have ever met him either, we look forward to recording the vocals with him for our second full length at the end of the month. We admire his work, and it’s an honor.
Is there an overarching concept behind your new album that ties the record together?
There is an overarching concept above the sum of our current works: Reconciling several worlds, realities, and dreams, and somehow bridging the gaps so that we can travel with grace from the mind to the dream to the soul to the body, from human to human, and place to place.
Have you begun playing these songs live and which songs have elicited the strongest reaction from your fans?
The only song we have included in our current live show so far, is “Shadow of a Shadow,” which we usually do as our closer, and fans have really taken to it, so we are so happy to feed the monster.
(Check out some tracks from the record here: https://soundcloud.com/graveface/01-universal-language and here https://soundcloud.com/graveface/the-casket-girls-heartless.)