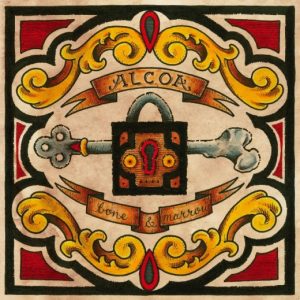 Alcoa, the solo project of Derek Archambault of Defeater, released Bone & Marrow today.  Alcoa started ten years ago while Derek Archambault was on tour with one of his many bands at the time.  He’d found himself listening to more and more artists like Gram Parsons, Elliot Smith, and Johnny Cash and “…wanted so badly to be able to write songs like that. I didn’t know how to at all, but it didn’t stop me from trying and churning out a bunch of shitty songs that I was too afraid to sing,” Archabault confessed.
“One day, while driving through Alcoa, TN, I decided on the name and started the process of figuring out how to not write a loud punk or four-chord jangly pop song.” With growing confidence, inspiration to write and desire to record, Archambault decided he needed to pursue Alcoa as a more serious undertaking.
Ghettoblaster recently caught up with Archambault to discuss Bone & Marrow, which was recorded in mid-2012, first in Derek’s hometown of Portsmouth, NH, then  at Mike Moschetto’s The Office Recording (N. Andover, MA) and at Jay Maas’ Getaway Recording Studio (for vocal tracks and mastering).  This is what he said about the album…
When did you begin writing the material for Bone & Marrow?
Some of the songs on Bone & Marrow have been around for a few years, but most were written over the last two or three on or in between Defeater tours.
What was the most difficult song to take from the initial writing stage through recording and mixing?  Why was it so troublesome?
Overall I think “Lucky Me” was the hardest to conceive, write and record because it is my first attempt at writing a real love song. It went through many different forms and was rearranged a few times in my head and in the studio.
Which of the songs on the record is most different from your original concept for the song?
Every song was put through a strange re-writing process when we were recording the drum tracks. Aaron Neveu (engineered & played the drum tracks as well as various other instruments on the album) and I would go over a couple songs in a day and lay down drum tracks in whatever form of the song we were feeling that day.
Did you have any guest musicians play or sing on the record?
The whole album is filled with my friends playing as guests really, as I have never had a solid line up for this project. Aaron Neveu plays in and tours with Woods and Cal Joss from Caspian plays pedal steel on the record to name a couple.
Who produced the record?  What input did that person have that changed the face of the record?
I produced the album with Aaron essentially, we worked any of the bare bones structures out together that I didn’t already have and the rest of the additions were all added in the studio as we recorded them.
Is there an overarching concept behind your new album that ties the record together?
Unlike the Defeater records, there is no overarching concept to this record, just a collection of songs from the last few years that I finally got to record with a band and flesh out like they’ve always sounded in my head.