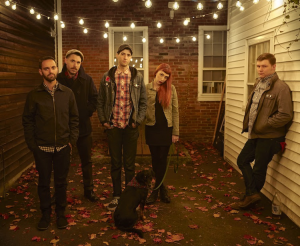 The sophomore full-length from Alcoa, Parlour Tricks, arrives upon a very new and invigorating chapter in Derek Archambault’s life.  The singer and guitarist, who also fronts the rising hardcore/punk band Defeater, has had an intense time since Alcoa’s 2013 debut Bone & Marrow; he got married, for one thing; for another, he had major surgery with a hip replacement after a debilitating injury.
After a successful campaign on crowd-funding site PledgeMusic (resulting in the recently released covers EP, Thank You), he had the imminent surgery, got back on his feet, and immediately began working on new music with both Defeater and his alt-rock/country-leaning Alcoa.  Recording near his home, in Portsmouth, NH, provided a warm and familiar environment with bandmate and engineer Mike Moschetto, etching out a slightly twangy and honest sound with shades of wistful, jangly ’90s alternative rock acts.
Originally started as a solo/side project, Alcoa formed just over 10 years ago when Archambault was on the road with one of his bands and wanted to do something a little different.  The Alcoa project had remained on the backburner until 2013 when Archambault teamed up with a troop of musicians (including his now wife, Alyssa Archambault) and recorded and released their debut LP Bone & Marrow to great critical acclaim.  Since its release, Alcoa has shared the stage in various forms along the East Coast with an array of bands.  Alcoa spent the greater part of this year penning what would become their newest endeavor, Parlour Tricks, which is scheduled for release on February 24 via Bridge Nine Records.
Today, Ghettoblaster has the pleasure of sharing “Always Chasing Me” from Parlour Tricks. We caught up with Archambault to discuss the song and this is what he told us.
Was there a particular catalyst or relationship that inspired the narrative for this song?
This lyrical content of the song is actually a bit darker than what is on the surface and is something I’m not very comfortable talking about. I put a lot of things into songs that I wouldn’t normally talk about, and this one goes pretty deep for me.
There is a strong male/female call and response happening here?  Are there actually two narratives or viewpoints being communicated?
There is only one speaker in the narrative, and Alyssa’s vocals are meant to make the chorus the focal point and echo the overall sentiment.
What was the composition or writing process like for this song?  Did it change at all in the studio?
The song was written like most others for me, just sitting down with my guitar and coming up with a progression for the verse, a melody and then the lyrics. Everything else just seems to fall into place once I start with the first little bits of a song. In the studio the song ended up taking a different shape by me playing electric guitar rather than my acoustic. It was going to be a lot quieter and somber, but I love what we did with it.
Are there overarching themes or ideas you are hoping to communicate with Parlour Tricks? Is there a grand artistic vision for Alcoa?  What would you like the band’s legacy to be?
I just hope people make a connection with these songs the same way I do when I listen to a record I really enjoy. I think that is all anyone can hope for when writing songs, you want to affect people on an emotion level, keep their attention and leave them wanting more. I am still very humbled that there is interest enough in the songs I write that I can put records out on a label I have loved for many years. I don’t want a legacy or anything grand like that, I just hope that people share these songs with people they care about and take something away with them after the record is over.
Listen to it here: