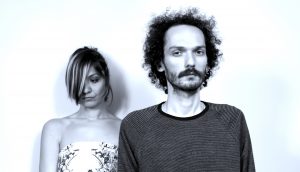 Fuji Kureta is an electronic pop duo consisting of Sahin Kureta (music-programming) and Deniz Ozturk (lyrics-vocals). These two, who have been making music together since late 2008, make songs in English and in French. The band’s sound oscillates between soft but strong melodies and very inventive beats.
Yetunde EP is the first release of Fuji Kureta on South Africa based Tree Machine Records.
Somewhere in between moodiness and tranquil bliss, Yetunde comprises songs mostly written during the last months of 2014. With this release Istanbul based electro pop duo Fuji Kureta explore candor and introversion. The writing is inspired by the use of any kind of art to overcome unpleasant things in life.
Ghettoblaster recently caught up with Ozturk to discuss the EP, which was released on January 27. This is what he said about it.
When did you begin writing the material for Yetunde?
We started at the beginning of autumn 2014, but some ideas date back to 2012 or so.
What was the most difficult song to take from the initial writing stage through recording and mixing?  Why was it so troublesome?
It was the title track, “Yetunde” because we were trying to have an African feeling to it without pointing the finger to it, you know, blend it with our way of making electronic music.
Which of the songs on the EP is most different from your original concept for the song?
The first track, “The Hunt,” was going to be a one and a half minute dark /droneish intro, but at the end we wrote melodies, lyrics, we put a structure to it and it evolved to become a song on its own really.
Do you get much of a chance to tour outside of Istanbul? What are your favorite places to play?
Not that much, even if we are close to Europe visas and travel costs make it difficult. We have played in Germany, France and Ukraine though, and also in Izmir, Ankara and Eskisehir in Turkey.
So far our favorite gig has been in Rostock, a coastal town in the very north of Germany. It was a small audience, everyone was seated, quiet and seemed mesmerized by the music. It was a ball!
Do you have a full-length (or perhaps another EP) in the works?
No, I mean of course we will always be writing bits and pieces of music here and there, but nothing systematic. we have put out a full length in June 2014 and an EP here recently, so we wish we will find opportunities to play these songs to people now.
(Visit the band here: http://www.fujikureta.com.)