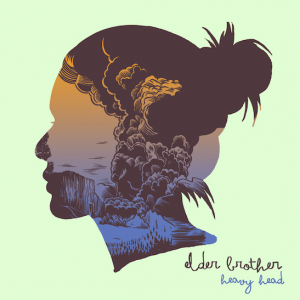 Elder Brother, the newly formed indie-rock project from Kevin Geyer (The Story So Far) and Dan Rose (Daybreaker), has announced plans to release their debut record, Heavy Head, via Pure Noise Records on March 11.  Heavy Head was recorded at The Panda Studios in San Francisco with Sam Pura in August 2013 and features additional contributions from Matthew and Charles Vincent (The American Scene).
Ghettoblaster recently talked to Rose about the record.  This is what he said about it.
When did you begin writing the material for your most recent album?
We started off sending each other little riffs and ideas while we were on tour, but we really only wrote all together in the week preceding the two weeks we recorded.  We wanted the writing process to be spontaneous instead of having people come in with fully finished songs so that everybody’s input could be heard on every song.
What was the most difficult song to take from the initial writing stage through recording and mixing?  Why was it so troublesome?
None of them were really that difficult, since we gave ourselves such a compressed period of time to write and record, it forced us to get good at just making decisions and going with them instead of exploring a million different options which can sometimes muddy the writing process.  It was definitely a cool way to write.
Which of the songs on the record is most different from your original concept for the song?
The song “Throw Me To The Wolves” ended up being way different than I had originally imagined.  I came to the writing session with just the guitar riff that makes up the verse and the pre-chorus, but Matt and Charles put a spin on the rhythm of the song that I never had even thought of before, and it ended up being awesome.
Did you have any guest musicians play or sing on the record?
Technically Charles and Matt were guest musicians on the record I guess.  Also Nadav Nirenberg (trombone player of Streetlight Manifesto) played piano on “Heavy Head”.
Who produced the record?  What input did that person have that changed the face of the record?
Sam Pura was there during the writing and definitely gave input, but really since the time between writing and recording was so condensed, there wasn’t really very much “producing” happening.  Most of the producing wasn’t so much in the songwriting category but just focusing on getting interesting tones.
Is there an overarching concept behind your new album that ties the record together?
Not really.
Have you begun playing these songs live and which songs have elicited the strongest reaction from your fans?
We just had our first show last night actually, so it’s hard to say.  A couple people knew “Throw Me To The Wolves” because it had been released a few days earlier, but overall it is probably too early to say.
(In anticipation of the upcoming release the duo has premiered a new song called “Throw Me To The Wolves” today.  Stream it now at https://www.youtube.com/watch?v=l5-2I1QBop4.
Visit the band here:
http://www.elderbrothermusic.com/
https://www.facebook.com/elderbrothermusic
https://twitter.com/elderbrother_
http://instagram.com/elderbrothermusic#
http://elderbrothermusic.tumblr.com/)