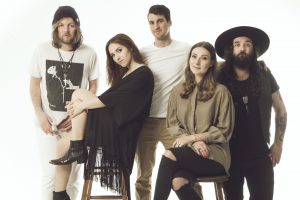 These days, Twin River is almost unrecognizable as the same band that first emerged on Vancouver’s indie scene in 2009. At that time, it was a stripped-down folk duo featuring singer-songwriter Courtney Ewan Bromley alongside guitarist Andy Bishop (White Ash Falls). Their performances were quiet, intimate affairs in which the two harmonized on sparse ballads.
Things began to change in 2011 when the pair made their four-song Rough Gold EP. They recorded the session with local guitarist Malcolm Jack (Capitol 6, ex-Sun Wizard) and singer-keyboardist Rebecca Law Gray (Chains of Love, Mode Moderne), who helped to imbue their rootsy tunes with full-bodied sonic depth.
After that, there was no turning back. Dustin John Bromley (Pleasure Cruise, Keep Tidy) joined on drums, establishing a five-piece lineup that favours noisy pop-rock and atmospheric synth textures over quiet laments.
This radically overhauled sound is on full display on the group’s debut full-length, Should the Light Go Out. It was recorded in the dog days of summer 2013, with sessions taking place at Kelowna, BC’s Bottega Studio with producer Darcy Hancock of Ladyhawk, and in Vancouver at the Hive Creative Labs with Colin Stewart (Dan Mangan, the New Pornographers, Black Mountain).
This yielded a sunshine-streaked collection of songs that span the full range of Twin River’s new sound, which is displayed prominently on the band’s forthcoming album, Should The Light Go Out, which drops via Light Organ Records on February 17.
Ghettoblaster recently caught up with Bromley to discuss the record. This is what she said about it.
When did you begin writing the material for Should The Light Go Out?
Most of the songs on the album were written in the winter of 2013. “Get Gone” is actually a very old song that I wrote in 2010, and that Andy and I used to play when we were a two-piece. The version on the record sounds very different than the way it used to sound though – it was really more of a country/folk song back then.
What was the most difficult song to take from the initial writing stage through recording and mixing?  Why was it so troublesome?
I think, though it was the oldest song, “Get Gone” was the biggest challenge – just because it was something I was already so familiar with going into the studio. It was kind of hard to stray so far from the original; you just get so used to hearing a song sound a certain way for a few years – it can be challenging to go back to the drawing board. I like that song, though, I wasn’t really ready to leave it behind. I was happy to see it change along with the actual sound of the band.
We finished writing quite a few of the songs on the new record while in the studio, because we wanted a really dynamic sound on the album, and wanted to avoid sounding overly rehearsed. There were a few moments in which that felt like a really daunting task – heading into the booth to record a part you’ve only just come up with can be tough, but it ended up keeping everything really flexible. In all honesty it’s probably not the most efficient way to make a record, but I think it turned out well, and kept us married to the goal of a naturally dynamic sounding album.
Which of the songs on the record is most different from your original concept for the song?
That’s probably “It Won’t Be Long.” I usually write songs on the guitar first, and then add a vocal melody, but this one had vocals long before music. I wasn’t really sure where to go with it, but Andy and Rebecca came up with those gospel-style backups, which really helped steer the song. It definitely sounds bigger and more dramatic than I envisioned it sounding.
Did you have any guest musicians play or sing on the record?
Darcy Hancock played the solo at the end of “Anything Good,” which to me, sounds so much like Darcy from the second or third note, but still totally fits with the song.
What input did  Hancock have that changed the face of the record?

Well, I think the record would have turned out differently if I hadn’t kept my mental sanity intact throughout (most of) the process – which is in large part due to Darcy. He was the best cheerleader/motivational speaker/hard ass coach I could have imagined. Musically, he really helped shape the sound of the record – I wonder how many hours saw Darcy and Andy huddled over Andy’s pedal board… He also added a lot to the percussion, most notably the impossibly fast shaker in “Bend to Break.”
Is there an overarching concept behind your new album that ties the record together?

I’ve been thinking about this question for a few days, and I’m not really sure. I guess if there is, it wasn’t intentional. I think one common element among these songs, though, is the idea behind the title, which is basically just a feeling of, “what if?” I am the kind of person who tends to over-analyze, I guess, and prepare for every possible outcome. I think I’m just starting to be aware of the toll that that can take, and of the impossibility of adequately preparing for everything.
Have you begun playing these songs live and which songs have elicited the strongest reaction from your fans?
We have played about half of them live, but the first of these songs we played was “Word to the Wise.” That one got a pretty big reaction, because it’s so different than our older material – a lot of which we were still playing at that time. It’s much faster and a little bit grittier than our older stuff. And by the time we began playing it at shows, we were so excited about writing new material that I think it was pretty obvious, and maybe a little infectious.
(Visit Twin River here: https://www.facebook.com/TwinRiverVan.)