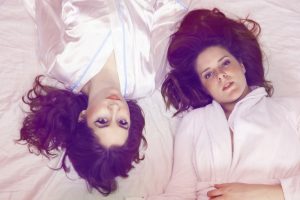 Starlight Girls’ new release Fantasm will hit the waves on October 13. There’s something about Halloween season that fits this six-piece Bushwick band’s siren allure and gothic-tinged theatricality. Their poetic lyrics are inspiring, channeled by a unique energy-driven mix of surf, pop, and noise with a bit of metal for good measure. SPIN has described Starlight Girls’ genre-bending sound as “undeniably luminous.”
Founder and lead singer Christina B played keyboards and sang as part of her family’s mega-church in Ohio before she escaped to Brooklyn disguised as an airline stewardess at the behest of guitarist Shaw Walters, a California transplant who had recently arrived in New York with a suitcase full of Bay Area weirdo noise rock sensibility. Sara Mundy signed on to sing and play keyboards and Tysen Arveson became the band’s resident bass player and tattoo artist. With the group taking shape, they later added vagabonds Josh Davis on drums and Isabel Alvarez on keyboards and backup vocals to fill out the sound.
The band toured extensively after self-producing their first EP, opening for a diverse range bands including Sharon Jones and the Dap Kings, Kate Nash, La Sera, Lucius, Tilly and the Wall, St. Lucia and Crystal Fighters. A comedic e-mail exchange with Xiu Xiu frontman Jamie Stewart led to a collaboration on 7-inch single 7×3 which was thoroughly steeped in noise and produced by Stewart. Produced by Christina B and Shaw Walters, Fantasm will satiate fans and newcomers with tracks such as “La La Lune” or the percussive album opener “Intrigue.” Thumping track “$9,000,000” is quite simply a thrill ride, while “Fancy” caps off the album on a high note, hooking you with an upbeat disco vibe before taking you on an epic journey. The result is hauntingly gothic, yet without plodding gloom; riveting without artifice.
Ghettoblaster recently caught up with Christina B to discuss the album and this is what she told us about it.
When did you begin writing the material for your most recent album?
The oldest track on this album is “$9,000,000.” I wrote it maybe six years ago before Starlight Girls. I had some weird temp job at Pfizer where I literally just sat in a cubicle all day learning Protools. That song was the result.
The newest one is “Lodestar,” which I think was in the works in early 2014. We’ve definitely taken our time with these tracks.
What was the most difficult song to take from the initial writing stage through recording and mixing? Why was it so troublesome?
“$9,000,000” was the hardest to record and mix because it was our first real experience working with live strings, which are tricky to mic and everything.
Which of the songs on the record is most different from your original concept for the song?
“Lion in a Cage” is pretty different from its first version. Shaw wrote that one and produced it on his solo album.
Did you have any guest musicians play or sing on the record?
Yes! Pamela Martinez (from Teletextile), Sara Nagano, and Josh Henderson on violins, Christopher Lancaster (from Huff This) on cello, and Alejandro Berti on trumpet.
Who produced the record? What input did that person have that changed the face of the record?
Shaw and I produced it. I did a lot of the arranging and futzed with the keyboards and vocals a lot, and Shaw made a lot of the decisions about which studio takes to use and overall room sound and things like that. We listened to the songs as a band a lot during the process and everyone had input.
Is there an overarching concept behind your new album that ties the record together?
It’s really a snapshot of our progression as a band. There are themes for sure that tie the album together, but those evolved naturally from where we were at while we were writing it.
Have you begun playing these songs live and which songs have elicited the strongest reaction from your fans?
Yes, we’ve been playing these songs live for a while now. Each of the songs have their biggest fans…it really just depends on the show. Some songs get people dancing, some make people trip out.
(Visit the band here: http://www.starlightgirls.net/.)