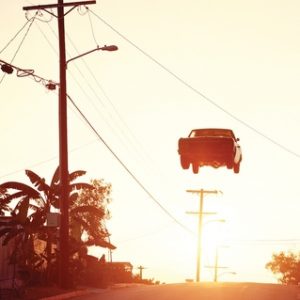 It’s been six years since Kinski’s 2007 release Down Below It’s Chaos showcased the spaced-out sonic rock of one of America’s premiere psych rock bands.   The long running Seattle quartet’s, Cosy Moments picks up where that record left off, retaining the heavy guitar crunch, but at the same time progressing toward a more accessible and direct sound.  It also offers a good deal more songs with vocals.
Ghettoblaster caught up with Kinski’s Chris Martin to discuss the record, which dropped via Kill Rock Stars this week.  This is what he said about it…
When did you begin writing the material for your most recent album?
The oldest song was probably written four years ago.  We wrote a lot of material before recording this album and threw a lot of stuff out.  That’s one reason the record took a while to finish.

What was the most difficult song to take from the initial writing stage through recording and mixing?  Why was it so troublesome?
“Conflict Free Diamonds,” the first single, was the one that we probably worked on the longest; which is weird because it’s pretty straightforward.  We just kept cutting a line here and shortening a chorus there.  A few songs just sat there staring back at us too.  For a long time!  “Unsure” never was right until right before we went into the studio.  Sometimes you need to book recording time to force songs to get it together!

Which of the songs on the record is most different from your original concept for the song?
“We Think She’s a Nurse.”  It was originally a kind of simple improvisation.  Randall Dunn, the producer, had a lot of ideas on that one and we added a lot of overdubs.  It developed into something much different while we worked on it in the studio..
What input did Randall Dunn have that changed the face of the record?
He’s done our last three records.  His main input was with drum and guitar sounds.  He’s really good with textures and overdub ideas to flesh out the sound.
Did you have any guest musicians play or sing on the record?
Yeah, we had Kimberly of The Dutchess and the Duke  sing backups on three songs, Don of Master Musicians of Bukkkake played acoustic guitar on one track, David from Midday Veil added some synth textures on a couple tracks, and a friend of Randall’s added sax on “Throw it Up.”

Is there an overarching concept behind your new album that ties the record together?
Yes, but I’ll leave that for you to figure out!

Have you begun playing these songs live and which songs have elicited the strongest reaction from your fans?
We always play an album’s songs a year before they’re recorded.  We like to try everything out live and really know how things are working.  Right now, we’re playing about five brand new songs that aren’t on the new album too.  The next record will be done in a lot less time than Cosy Moments!
(Here are two singles for your listening enjoyment:
Conflict Free Diamonds:  https://soundcloud.com/killrockstars/kinski-conflict-free-diamonds
Last Day On Earth:  http://killrockstars.bandcamp.com/track/last-day-on-earth-3)