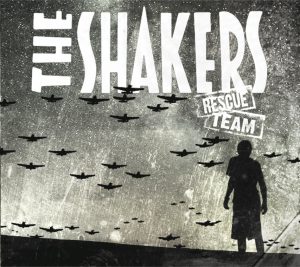 Just when it seems that every musical hybrid has been realized, Los Angeles’ The Shakers emerge as the missing link between soul and grit-rock.  Described as “The Black Keys meets Heart” or even “AC/DC meets The Supremes,” The Shakers create music that is original and charismatic.  They deliver a brand of modern music that is loud, unapologetic, an allows them to be masters of the live concert stage.
The Shakers have spent the 2013 touring the West Coast while simultaneously laying down the tracks for their new album, Rescue Team, the follow-up to 2011’s Oh So Loud. The album was tracked entirely to one-inch analog tape with co-producer/engineer John Schreffler, Jr. When completed, the band was so pleased with Rescue Team they asked fans to help fund a vinyl release via Indiegogo.
Ghettoblaster caught up with guitarist Chris Lee and vocalist Jodie Schell prior to the release of Rescue Team on September 3.  This is what they said about it.
When did you begin writing the material for your most recent album?

Chris Lee: This record is unique because it spans a rather large realm of our writing phases.  A good mix of the tracks are songs that we had recorded on an early demo EP release that had been staple songs to our live set.  The songs grew and changed as we played live and eventually finalized the band’s line up and we knew we needed to re-examine them in the studio.  While we were recording Oh So Loud, the band’s first full length record, we began to vigorously write new material and we even ended up sneaking on a new song “The Hold” which didn’t come into existence until the last few weeks of tracking.  We all immediately fell in love with the song and knew it had to be on the record.
What was the most difficult song to take from the initial writing stage through recording and mixing?  Why was it so troublesome?

CL: I think for me personally, it would be “The Hold”.  We all were really vibing on the song and loving the feel and flow of it but it was so new we weren’t 100 percent sure it had found its final resting place yet, so to speak.  We went in and recorded it and I almost immediately hated it.  I just didn’t think it was ready and I started pushing really hard to cut it from the record.  I just wanted to give it more time to get worked out live and come back to it when it was more mature.  I listened to it over and over and over and just couldn’t get past the feeling I had for it.  Finally, I asked our engineer to completely erase ALL of my guitar tracks and send me the recording we had with just the drums, bass and vocals.
I think being able to hear the song in that environment helped me visualize the song better and I ended up just about completely rewriting all of my guitar parts and suddenly the song exploded with life.  Usually things like that have a little more time to occur naturally as we tour but with this song we really wanted it on the record, so it took a bit of a different route to find its home.
Which of the songs on the record is most different from your original concept for the song?
CL: I think “I Spy” would probably have to be the song that evolved the most.  We began writing that song SO long ago, probably in 2009 or 2010.  The first incarnation of it was a super proggy rock song in a very swinging three time signature, very “Crosstown Traffic” by Hendrix kind of a feel.  Nick and I were hashing it out and re-working it and re-working it and re-working it.  I eventually made a demo on my laptop that had more of the laid back, swung kind of a feel it has now and brought that to the table.  This was still back in 09 or 10, whatever year it was.
The song got thrown on the shelf as we started looking for a new bassist (two bassists ago), until we finally brushed the dust off it as we began writing material for Rescue Team. The four of us holed ourselves up in a rehearsal studio and rather painstakingly went ballistic with the arrangement and finally got it to a place where we felt like it worked.   It was a pretty drastic transformation from start to finish.
Who produced the record?  What input did that person have that changed the face of the record?
CL: We’re very happy to say that this record is completely self-produced.  We knew what we wanted this record to sound like and we knew how we wanted to do it, but we couldn’t have done it without the help of our engineer and musical cohort, John Schreffler Jr.  He has this great old one-inch reel-to-reel tape machine and a whole house full of great recording gear.  Johnny knows our sound better than anyone we’ve recorded with before (he’s actually sat in on more than several occasions as a bassist as we’d gone through auditions) and we knew he’d be the one to help us achieve what we were looking to get from a sonic perspective.  He was a great help in being a mediator from those moments of “I think this should go THERE…” “nonononono it should go THERE”
Did you have any guest musicians play or sing on the record?

CL: Johnny can be heard in a few special moments in the record, a foot stamp, a count off, a little guitar swell, little fun things here and there, but for the most part we wanted this record to really show case what it is The Shakers do live and who we are as a band.  Hence the lack of phone calls we put in to Slash and Kenny G for guest spots (sorry guys, maybe next time?).

Is there an overarching concept behind your new album that ties the record together?
Jodie Schell: Rescue Team encapsulates everything the band has gone through since our 2011 release OH SO LOUD. OH SO LOUD was such a celebration of finding each other and feeling impenetrable.  RESCUE TEAM is what happened when we went out to take on the world.  It got messy, and challenging, and scary at times (I get teary thinking about the losses we suffered and how helpless it seemed at times).  But we were there for each other so we made it.   I think we even pushed each other further creatively, and I’m BEYOND excited by the results.

Have you begun playing these songs live and which songs have elicited the strongest reaction from your fans?
CL: All of these songs, for the most part, have been in our live rotation, some longer than others, some since day one. One of the strangest things we’ve come to find is that, much like our genre of writing, there doesn’t seem to be one real formula for songs that set a crowd off.   Songs like, “Train Song,” “Villain” “Low Lights” “Whatcha Want” and “The Weight” typically tend to be staples in our set.  We know those songs are consistent across the board, but other songs will come and go from the set depending on our mood or what we seem to be doing well with at the time but even still it can be very bizarre how reactions go.
Some nights a crowd will go absolutely nuts over a certain song, then we’ll come to find that same song will create a bit of a lull in the set for reasons unbeknownst to us and we’ll start to scrap it from the set.  Then we’ll play it randomly again and BOOM the room will light up for it again.  I’m over trying to figure it out 😉
(Find out more about The Shakers here: https://www.facebook.com/ilovetheshakers.)