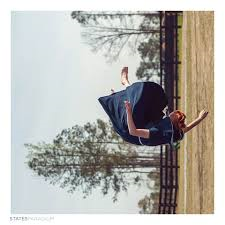 After an impressive debut release, indie supergroup States return with their beautiful and lush second installment – Paradigm. Delving into more experimental territory, Paradigm is a lesson in dynamics — rich atmospherics are grounded by propulsive rhythms, delicate layers are juxtaposed by driving guitars, and heady lyrics are masterfully delivered by an arresting voice. With foundational roots in such beloved bands (Copeland, Lydia), expectations have always been high for States. Paradigm not only secures the bands independence as a stand alone force, it also serves as a statement of what’s to come.
Ghettoblaster recently caught up with Bryan Laurenson, formerly of Copeland, to discuss the States record.  This is what he said about it.
When did you begin writing the material for your most recent album?

We began the initial writing of the album towards the beginning of 2013, but didn’t really dive in till the spring. Because we produced and mixed this album ourselves, the writing and recording process were somewhat blended, so the actual recording really began the same moment as the writing.
What was the most difficult song to take from the initial writing stage through recording and mixing?  Why was it so troublesome?

“Erase It All” may have been one of the most difficult. The basic idea of the song was written before everything else, and it was never meant to be a States song. As the writing/recording process got going, it was a musical idea that Mindy really liked and had lots of vocal ideas for. We slowly transformed it into something that made more sense for the record, but at some points it felt like a struggle. It was always the song we’d want to “deal with later”. We even had a few different mixers work on the song, because we eventually felt like we had lost some perspective on it. Nothing ever quite clicked, and we talked about just scrapping it from the record altogether. We finally shelved it until the very last moment, and then revisited it just a couple days before mastering. We were able to bring in some new elements and get the mix to a place we felt good about.
Which of the songs on the record is most different from your original concept for the song?

Because of the way the writing and recording process were so intertwined, it seems that a lot of the songs eventually strayed away from their original concept. Each song would start as 15-30 second musical idea that Stephen or myself would begin, and would then change and flow based on the vocal and rhythm ideas brought in by Mindy, Jon and Dean.
“The Night” perhaps changed the most from its early form. The original idea was extremely bright and upbeat. It was synth driven and very poppy. Mindy and myself were fans of it, but Stephen wasn’t. He was adamant that it shouldn’t make the record, and in its early concept he was probably right. I ended up completely retooling the music in the verses, to bring a hint of atmosphere and darkness, while Mindy completely changed the vocal melody. The song still wound up one of the most poppy tracks on the record, but it sounds completely different than the way it began.
Did you have any guest musicians play or sing on the record?

We had several plans to include both guest musicians and guest vocalists on the record, but none of them ended up panning out.
Who produced the record?  What input did that person have that changed the face of the record?

I produced/mixed the record alongside my brother, Stephen. Most of the music was written as we recorded, which was a process very different to our last album, Room to Run. So you could say the production greatly affected the writing, and vice versa.
Have you begun playing these songs live and which songs have elicited the strongest reaction from your fans?

We haven’t played any of these songs live yet. Our goal is to be touring some in the spring. We plan on playing a lot from this new record if we do.