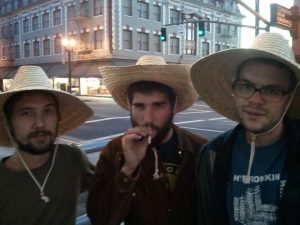 Hyrrokkin is the name of a Norse giantess and a moon of Saturn, but don’t expect occult metal or lumbering noise from this band. Their facebook page lists Sun Ra, Jesus Lizard and the Melvins as influences, and while that could easily result in overly-zealous and wanky abstractism, the trio of Hyrrokkin somehow manage and create something that’s accessible as it is challenging.
2011 saw the release of their debut cassette, Astrionics (available for a “name your price” rate at http://hyrrokkin.bandcamp.com/album/astrionics) and the guys are currently hard at work on the follow up. Still untitled and without a solid release date, Ghettoblaster was able to talk to drummer Brett Nagafuchi about what is sure to be an amazing, amazing sophomore release.
When did you begin writing the material for your most recent album?
We started playing together in June of 2012, and hit the ground running. We wrote about five tunes, and then went out on a North American tour about two months later. We got back, and wrote a lot of stuff that headed in a very different direction. We recorded in October, and have already been working on some new music, including a collaboration with Japanese noise legend Merzbow.
What was the most difficult song to take from the initial writing stage through recording and mixing? Why was it so troublesome?
The most difficult tune would probably be the final song on the record… Ed built it up as a serialist/twelve tone piece, with room for improvisation. Instead of having the band freak out during the improv sections, he charted a series of diads for the group to play, that basically maintained the twelve tone formula, but we brought in some killer musicians from New York’s downtown jazz scene to join us. Steve Swell played trombone, Roy Campbell Jr played trumpet, and Daniel Carter brought a number of reed instruments and his trumpet. He mostly played soprano sax. The cues were all sight cues, and the phrasing of the twelve tone lines was tricky. We also had only a rough idea what direction the improvisations would take, but the horn players killed it, and the track sounds awesome.
Which of the songs on the record is most different from your original concept for the song?

‘HAARP’ changed the most… If you check out our cassette EP, Astrionics, you can hear how the tunes have developed over the past year. We extended the improv section at the beginning, and really ratcheted up the intensity level. We rewrote the outro, made it much simpler, but stretched it out… then we had Roy, Steve, and Daniel join us for those sections, and overdubbed ourseles playing some junk percussion. Aside from one or two spots where we added feedback, the percussion might be the only part we overdubbed/layered in the studio…
Did you have any guest musicians play or sing on the record?
Aside from Roy, Steve, and Daniel, that was it. This forthcoming release with Merzbow should be really awesome- we’ll probably be heading back to Brooklyn to record in the Summer. Not sure where it’ll be coming out just yet. We composed some material to two pieces that Merzbow wrote and sent to us- so far, it sounds great.
Who produced the record? What input did that person have that changed the face of the record?
We recorded at Seizures Palace in Brooklyn, with Jason LaFarge. Ed has worked with Jason more than a dozen times by now, and Jason is an absolute pro. He’s recorded hundreds of records, but some of the best known records he’s engineered or mixed include albums from Swans, Devendra Banhart, Khanate, Angels of Light… Jason is an excellent engineer, with a great hear. We all had input into the mixing process, but Jason knows his gear, and knows how to dial things in. I think the record sounds very natural- the instruments are captured very transparently, so it still sounds the way it should- like us playing with our gear, playing in the huge stone tracking room at the studio.
Is there an overarching concept behind your new album that ties the record together?
Not at all. We just try to challenge ourselves, and write the music that we want to hear.
Have you begun playing these songs live and which songs have elicited the strongest reaction from your fans?
We’ve actually played all of them live, except for the untitled serialist piece… ‘Anacoluthon’ is probably the most exciting to play live. There’s a lot of repetition- the piece starts with us hitting a really dissonant chord about 80 times, and then the main riff is two alternating, similar versions of a phrase, in two odd time signatures.