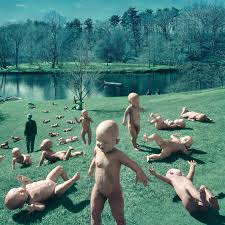 Austin, TX progresive / experimental quartet BOYFRNDZ emerge with their second full-length record Breeder.  Self-produced by the band and engineered/mixed by Erik Wofford (Maserati, The Black Angels, White Denim), Breeder sees the group further expanding their meticulously constructed hypnotic sound into new realms of colorful, energetic and emotional territories.
Impossible to pin a label to, BOYFRNDZ seamlessly merge hook-laden, reverb soaked vocals with swirling guitar melodies and complex rhythms.  Breeder is an impressionistic journey that is a laudable entry into the pantheon of 21st century musical evolution.
Ghettoblaster recently talked to Scott Martin (vocals / guitar) about their writing process, concepts, and recording processes for Breeder, which drops via Brutal Panda on April 1.  This is what he told us.
When did you begin writing the material for your most recent album?
Early last year, I think. It’s kind of hard with us.  By the time we’ve finished writing any of our records we’ve usually already begun working on a new one. We’ve already got three or four new ones in the works for a follow up to Breeder now. The process just kind of keeps going.
What was the most difficult song to take from the initial writing stage through recording and mixing?  Why was it so troublesome?
Probably “Design”. It was one of the few we finished the week before we went into the studio, and it’s just long, and we had to get all of the dynamics down on the spot pretty much. Recording typically isn’t a very arduous process for us, though. We usually have our shit together. We did this whole record in about five days, which was the longest session for us to date.
Which of the songs on the record is most different from your original concept for the song?
Surprisingly none. It’s always during an improv session with Aaron (Perez), we’ll fall into an idea and we both usually know when it’s something we’ll want to cultivate. We’ve been working this way long enough that our musical communication and partnership is really strong, there’s not a lot of second guessing. Maybe there should be.  But for now, I don’t think so. It’s a very organic way of writing. I’m incredibly thankful to have the chemistry I have with Aaron, Joseph (Raines), and Jesse (Moore). Fingers crossed we get to keep it for a while.
Did you have any guest musicians play or sing on the record?
Not on this album. This is just the four of us. Jesse really came through with the keyboard and piano work on this record.
Who produced the record?  What input did that person have that changed the face of the record?
We produced this record ourselves. Erik Wofford, our engineer, certainly has a strong opinion in studio. He is, if anyone, a kind of phantom producer. But we arranged and wrote and knew what we had in mind all before even stepping back into Cacophony.
Is there an overarching concept behind your new album that ties the record together?
Not Intentionally.  Like I mentioned before, our writing is constantly evolving, there’s not a point where I just sit down and muscle these out as a cohesive unit. Each song has its own individuality. The title, Breeder is just a reference to the point in life I feel the four of us happen to be in. We’re all in our late 20s, early 30s, and all around us people are having children, and it’ supposed to be the most important thing you can do when you get to this age. It’s frustrating how normal the idea is…like it’s ultimately what we’re all expected to be when, for us, these records we work on are our children. I’d say there’s a general frustration with humanity in a lot of the lyrics on the record. I didn’t plan for that, it’s just what came out, I guess.
Have you begun playing these songs live and which songs have elicited the strongest reaction from your fans?
We have. We’ve played most of them, anyway. These days set times still hover around the 40 minute mark so we can’t play everything we want. Hoping on this upcoming tour to get to do a little longer sets, so that we can really dig in, take our time and show people what we can do. I think people really get down to “Burn Through It”, and “All at Once”.  But, who knows. It’s a blur.
(Visit Boyfrndz here: www.boyfrndz.bandcamp.com and www.facebook.com/boyfrndz.
Catch the band on tour here:
March 7-16 – Austin, TX @ SXSW Music Festival
March 20 – Albuquerque, NM @ TBA
March 21 – Salt Lake City, UT @ The Shred Shed
March 22 – Boise, ID @ Treefort Music Festival
March 23 – Boise, ID @ Treefort Music Festival
March 25 – Seattle, WA @ Chop Suey
March 26 – Portland, OR @ Holocene
March 27 – Oakland, CA @ TBA
March 28 – San Francisco, CA @ Bottom of the Hill
March 29 – Los Angeles, CA @ The Mint
March 30 – Phoenix, AZ @ Last Exit
April 2 – Houston, TX @ Warehouse Live
April 3 – New Orleans, LA @ Gasa Gasa
April 4 – Baton Rouge, LA @ Spanish Moon
April 5 – Atlanta, GA @ 529
April 6 – Greensboro, NC @ House Show
April 9 – Philadelphia, PA @ Kung Fu Necktie
April 10 – Brooklyn, NY @ St. Vitus
April 11 – New Haven, CT @ Panty Haus
April 12 – Pawtuckett, RI @ Machines with Magnets
April 13 – Montreal, QC @ Bar TRH
April 15 – Hull, QC @ Le Troquet
April 16 – Toronto, ON @ Izakaya
April 17 – Detroit, MI @ PJs Lager House
April 18 – Chicago, IL @ The Beat Kitchen
April 19 – Lawrence, KS @ The Jackpot Saloon
April 20 – Oklahoma City, OK @ The Blue Note)