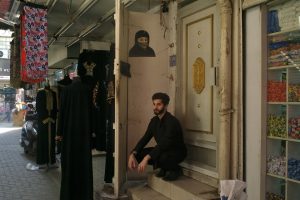 +Aziz is a Kuwaiti songwriter residing in New Orleans.
His first work SoHo Spirit, is a collaborative work synthesizing the experience of becoming immersed in the energy of Manhattan’s West SoHo neighborhood, which is accentuated by the presence of high-end brands like La Colombe and Rick Owens. Although trips to the Arabian Peninsula (Khaleej) region were frequent, the bulk of the album was performed and recorded in 250 Hudson St. where +Aziz built a near-idyllic lifestyle for a period of time stretching between 2011 and 2013.
He interweaves alternative rock guitar tones inspired by southern folk music against a backdrop of contemporary Middle Eastern percussion and beats. With an identity that oscillates between Arab-American and native Khaleeji, +Aziz is working across vocabulary from ’90s alternative rock and folk music. His debut EP offers a uniquely textured voice, robust melodies, boisterous rhythms, and a variety of musical styles. He sings in English, Kuwaiti dialect and formal Arabic.
Kicking off with the Islamic holy month of Ramadhan, his debut single “RMDN” was in English and released June 17. The single is inspired by the feeling of fasting alone and comes across as an ode to the inherent hierarchy of social media.
+Aziz’s upcoming work will draw on Khaleeji and New Orleanian rich musical heritages (think pearl diving music from Kuwait, Bahrain, and the Emirates meets big brass and parade music).
Immersing himself in what local recording studio founder Mark Bingham refers to as “the spiritual intention of the New Orleans music scene” he currently resides in Bywater, a neighborhood bordering the lower 9th ward, where he is rehearsing and recording with various local musicians as he develops new material.
Ghettoblaster recently caught up with +Aziz to discuss the EP, SoHo Spirit, which was self-released on July 17.
When did you begin writing the material for SoHo Spirit?
The EP’s tone and sonic palette is inspired by NYC’s SoHo neighborhood and the idea of creating a space where the raw and refined intersect. My main collaborator in developing a cohesive sound was Seif Al-Din, a producer who helped me develop beats and guided the vocal textures of the EP.
The material itself was written over the span of nearly a decade that stretched from college to the years I spent in NYC. Surreal was written as early as 2002 whereas RMDN and Um elBanat were written closer to 2012.
Which of the songs on the LP is most different from your original concept for the song?
“RMDN” came to me in fragments. The original framework of the song was a poetic reflection on the mechanics of social media. As time went on and my relationship to the song evolved, I started thinking about adding a pseudo-religious layer that conveyed a deep-seeded contrast. That while my childhood was filled with family meals, I’ve had to fast alone during Ramadan many years since relocating. So “RMDN” ended up becoming a song that works to surface my feelings about this sharp contrast, my inability to belong despite being swallowed by social media platforms.
What led you to New York and subsequently, New Orleans?
While many Arabs relocate due to unfortunate circumstances (e.g. socio-political turmoil, sexual prejudice) my relocations, especially to New York and then New Orleans, were intended to get some good music out of me and (perhaps more importantly) to get the whole ‘Khaleeji rock’ thing right. I’ve always been fascinated by the American South; after relocating to NYC and settling there for a while, I began to think about relocating to music cities like Austin Texas or Nashville. New Orleans emerged as a turnkey solution for me, so I jumped on the opportunity and have been exploring the musical heritages of the Middle East and Louisiana.
The record was recorded in New York, correct? Has living in New Orleans affected the way they’re performed?
We’re still exploring the potential here; you can follow my progress on Periscope, a livestreaming app that I’m using to document my journey.
The musicians I’m playing with in New Orleans are doing some very interesting things by adding their own touch to the songs. Sometimes the sound is more raw and grungy, other times it’s energetic and jazzy, you can’t get away from jazz in this town. I’m also going to continue seeking out producers that can help me take a more beats-driven approach given the significant enthusiasm that exists around genres like bounce, trip-hop, and beyond.
What is the deal with the + (plus sign)? Is it just to differentiate you form all of the other Aziz’ out there?
Yes, well it definitely does that. The plus sign came about in high school and it stuck. I guess it was a nickname type of thing that turned into a branding tool. It was easy to get use to it.
What are your touring plans for summer or fall?
My major plans for the summer revolve around the 10th Anniversary of Katrina.
I’m working with local yoga instructor Lauren McCabe to do a 12-hour outdoor yoga-concert that will take place from sunset to sunrise on Saturday August 29. I’ll be onstage the whole time so it’s going to be an endurance test for me. This unique event will help me establish my name locally and I think I should be in good shape to gig around the American Music Triangle (Memphis, Nashville and New Orleans) over the course of 2015-2016. I’m also going to be pitching proposals to some art venues in Dubai and Qatar since the scene there is both sparse and booming.
(Visit +Aziz here:
https://twitter.com/Plusaziz
http://plusaziz.tumblr.com)