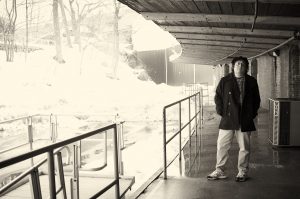 Recording artist, singer-songwriter, multi-instrumentalist, producer and filmmaker Arthur Nasson was joined by his sons for the five-song EP The Emperor’s New Sound, which was released by Philistine Records on April 28. These new recordings crackle with imagination, wit,and musicality. Simply, The Emperor’s New Sound brings about a new level of melodic, poetic, harmony drenched, sonic exploration.
Ghettoblaster recently caught up with him to discuss it and this is what he told us.
When did you begin writing the material for The Emperor’s New Sound?
Sometime soon after the previous album West Cambridge Cowboys came out. I’m writing pretty much constantly, often working on more than one project at a time. When things start to reach completion it becomes apparent as to how it all goes together and gets released.
Your music really harkens back to classic rock and pop. Who were your influences starting out?
There are so many to try and narrow it down… The artist that stand out most for me were the people who brought together all kinds of ideas creating something truly unique. Ray Charles, The Beatles, Steely Dan, Todd Rundgren, Frank Zappa, Thelonious Monk, Jimi Hendrix, Bach, all kinds of Jazz, blues, and of course experimental music like Stockhausen, Subotnick, Cage. It comes down to whether the ideas hold up. I am interested in things for musical reasons, trends, or when something happened historically doesn’t really matter to me.
Which of the songs on the EP is most different from your original concept for the song?
Probably “Multiverse”. The EP was not a home recording, we went into Replacements guitarist David Minehan’s studio to record the EP. Given how much arranging was going on I did detailed demo’s at my home studio ‘Scabbey Road’ so that when we went in we could work as quickly as possible. With the song “Multiverse’ though I wanted to experiment more.
For example we had my sons doing theremin, altered guitars, spoken word, various noise, while I added synthesizers, electronic percussion and whatever else we thought might work because the song called for it. To me each song conceptually dictates its own approach.
Your children play on the record. That had to be a lot of fun recording with them. Did you write the songs for the EP with the idea that you’d record these particular tracks with them?
It’s incredibly gratifying I have amazing relationships with my sons and don’t push them in any direction. I let them decide what they want to do, and this was their decision, they really wanted to be part of the process. So yes we rehearsed a great deal and knew in detail what we would do before going in to record.
Do you have any plans to tour this summer?
We’re in discussion with people and trying to work that out currently. As the music and videos get both national and international attention it makes sense to try and visit many of the countries who seem to enjoy what we’re up to. Of course then the boys can shoot out TV sets like Elvis. https://youtu.be/K-VChLT7-5M.
(Visit Nasson here: http://www.arthurnasson.com/.)