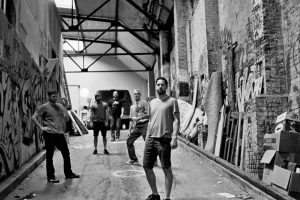 Revered indie rock outfit The Jazz June is set to drop their first new studio LP in over 12 years, After The Earthquake, on November 11 via Topshelf Records. The LP was recorded with producer Evan Weiss (Into It. Over It.) at Gradwell House this past spring, with Steve Poponi (Young Statues) engineering/mixing and Dave Downham (Dowsing, Into It. Over It.) mastering.
Ghettoblaster recently caught up with vocalist guitarist Andrew Low to discuss the record. This is what he shared.
When did you begin writing the material for your forthcoming album?
I actually started working on songs about three years ago, this was even before we talked about working on new Jazz June material. I had been playing in punk and garage bands for a couple of years and I just got the urge to work on songs that were more in the style of The Jazz June. At the time I just thought I would write and maybe record them with guys from London, but when Bryan gave us a kick up the arse to start playing again the songs all started to come together quite nicely.
The process was really fun because I would write a basic version of the rhythm and vocals, send it around to the guys and it would be returned to me in as a complete song that was 1,000 times better than I could have done on my own.
What was the most difficult song to take from the initial writing stage through recording and mixing?  Why was it so troublesome?
Actually, we have been working on the song “Short Changed” for almost eight years. Bryan wrote it for a solo album that we helped him with back in 2005. For some reason it took me a million different tries to get the vocal harmonies to fit his guitar parts, and we changed the arrangement several times. But I am really happy with the version on ATE. It is one of my favorites on the album.
Which of the songs on the record is most different from your original concept for the song?
“Ain’t It Strange” is quite different from the idea that I had in my head. I originally wanted it to be a very mushy, noisey, My Bloody Valentine-style song with swirling organs and male/female vocals bleeding together, but the more stripped down version on the album sounds great. Also, the piano parts and additions that Evan made to it have made it sound really great.
Did you have any guest musicians play or sing on the record?
Alana from Joanna Gruesome sings on “Ain’t it Strange.” I love her band so that was a real highlight of the process. Naomi Hammerton, a good friend and amazing musician, added vocals to a few songs. She is in a band called the Sea and I with one of the guys from The Hoosiers and she is an absolute pro. She nailed the takes first try and then added like four harmony parts, it was actually incredible. Evan from Into It/Over it also added guitar, keys, backup vocals, percussion etc. to several of the songs.
Who produced the record?  What input did that person have that changed the face of the record?
Evan from Into It Over It produced the album and I think he helped us to be a bit more economical with respect to song arrangements. He would say things like “Why is this song six minutes long? You play the same chord progression in the verse 12 times before the vocals come in?” He also added instrument parts and vocal harmonies that elevated certain key parts of the songs really well. It was great to have a second pairs of ears.
When we recorded our other albums we may have doing a bit of over playing, in my opinion. That was probably a reaction to playing punk and hardcore for years, which is a style of music that doesn’t lend itself too much experimentation. The experimentation is still there with the new album but it’s in a more refined way. We been playing together for 20 years so we are more selective, rather than just chucking it all in.
Steve Poponi engineered and mixed the album and he really helped to blend in all the layers in a way that made sense. I think in the past we just cranked all the faders to the max and let them wrestle with each other sonically, but he gave a more experienced approach to the overall dynamics of the songs.
Is there an overarching concept behind your new album that ties the record together?
I guess the over arching theme is feeling a bit lost and unsure of how you are going to get on with life after a major change, which is referenced in the album title, After the Earthquake. It could be a death of a loved one or a break up or a big move, anything that is a new phase. These situations make you feel a bit uneasy, like you have resurfaced on a new planet. And that new place can be unsettling but it also comes with a host of new opportunities.
Have you begun playing these songs live and which songs have elicited the strongest reaction from your fans?
“Over Underground” went over really well when we played it at the Boot and Saddle show in Philly. It is a really fun song to play live because of the changes and Bryan’s guitar lead is really catchy. The vocals on the album version is a bit more aggressive from the split version with Dikembe, which is the result of playing it live a few times and finding the right way to place the vocals in the mix.
(Stream “Edge of Space” here.  After The Earthquake is now available for pre-order here.)