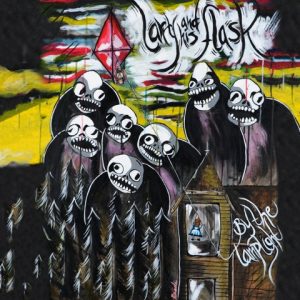 Oregon’s bluegrass-punk phenoms Larry and His Flask are unleashing By the Lamplight on the world primarily via Frank Turner’s Xtra Mile Recordings.  This is the band’s sophomore full-length following closely on the release of their Hobo’s Lament EP released last fall and their 2011 debut All That We Know.  Although they’ve staked their name on their raucous live show, By the Lamplight clearly shows that Larry and His Flask possess some serious musical chops and have honed their signature bluegrass-punk hybrid to impressive new levels.
Known for a sound that is something akin to initiating a mosh pit at a barn raising, the band is part Gaslight Anthem, part O’Brother and even a little Low Anthem.  They’ve spent the past two months touring Europe with Frank Turner and have just returned to the states for a summer headlining tour and a fall tour with Murder By Death.
Ghettoblaster recently caught up with LAHF’s Andrew Carew to discuss By The Lamplight.  This is what he told us about it…
When did you begin writing the material for your most recent LP?
Well some of it had been in the works for a long time, and some of it we wrote right there in the studio. But most of it we wrote a month or two before our time in the studio.
hat was the most difficult song to take from the initial writing stage through recording and mixing?  Why was it so troublesome?
Well I’d say it all went pretty smoothly, but the most difficult song was probably “Log Hearth and Ash”. Initially, Ian had just been playing it alone on the banjo sexto for a while and we all talked at length about how cool it was gonna sound once we got everything fit around it with a cool drum beat and all the instruments in there. But the banjo proved to be pretty temperamental during the recording process and took almost half a day just to get a good take where it didn’t go too far out of tune. But we’re happy with the end result.
Which of the songs on the record is most different from your original concept for the song?
Well the last song, “Tides”, was originally just supposed to be me (Andrew) singing the whole thing. But once we got everything recorded there was something not right about the sound, so we decided to have everyone singing a part on the last song and kinda overlapping each other. Not a whole lot different, but it turned out pretty sweet.
Did you have any guest musicians play or sing on the record?
Yeah, we had our good friend Jenny Owen Youngs sing a verse on “Battle For Clear Sight” and do some back ups on “Gone From You”. The female vocals add a really cool texture that we’ve never experimented with before.
Is there an overarching concept behind your new album that ties the record together?
We’ve always been against the idea of having anyone give any outside advice on how our songs should be arranged.