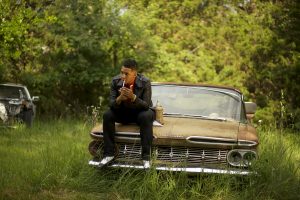 “A classic old soul with a modern edgy mind ,” The Reasn strives to make music that is honest and relatable, influenced by some of the greatest…The Beatles, Donnie Hathaway, Marvin Gaye, Michael Jackson.
It all began with singing in church at a young age. The Reasn, born Al Michael Nelson, grew up in Columbia, Missouri, performing in local talent shows and as a teenager touring the Midwest as part of a pop/R&B group opening for several major acts. Singing, songwriting and performing quickly became a passion to which he dedicated most of his time. In 2012 he moved to LA to embark on his journey of building a solo career and writing his debut album. His “rebel with a cause” attitude shines thru in the topics of his songs, which tell a story of self-discovery, life, love, struggles, hope exposing the demons that we all face within us.
The Reasn released the single “Better” last month (https://soundcloud.com/thereasnmusic/better-1), but plans to release an EP independently in 2015.
Ghettoblaster recently caught up with Nelson to discuss the 25 Till Empty EP. This is what he told us about it.
When did you begin writing the material for the EP?
I started writing the EP in May. That’s when I really started being myself without any inhibitions.
What was the most difficult song to take from the initial writing stage through recording and mixing? Why was it so troublesome?
Most of the song concepts came instantly as soon as I heard a beat or chords. My most difficult song was a ballad I wrote called “I hate you.” It was a great song with just piano and vocals. We felt like we needed to produce it out more and tried several different routes, just to come to the conclusion that the original stripped down version was the best.
Which of the songs on the record is the most different from your original concept for the song?
Things turned out the way I imagined them in my head. I have a song called “War,” which is my most experimental and different song. It has a retro vibe fused with modern edgy sonics.
Did you have any guest musicians play or sing on the record?
No, some of my producers played live instruments on my records though.
Who produced the record? What input did that person have that changed the face of the record?
The main producer on the record is Neff-U who has worked with some of the greats, Michael Jackson, Dr Dre, Eminem, etc. He allowed me to be myself and let out who I really am on these records.
Is there an overarching concept behind the EP that ties the record together?
Yes, honesty and dealing with issues are the main concepts that dominate the record. It’s like someone hit the “record” button and I started talking about my life.
Have you begun playing these songs live? Which songs have elicited the strongest reaction from your fans?
I’ll be testing the songs for the first time live on the B.o.B No Genre Tour Nov 11 in Chicago and Nov 13 in Indianapolis.
(Visit The Reasn here:
https://www.facebook.com/TheReasn
https://twitter.com/thereasn
https://www.youtube.com/user/thereasnmusic
See the video for “25 Till Empty:
)