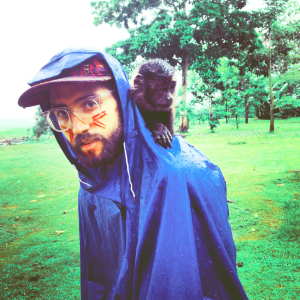 Santiparro means “the lens that sees many things not usually seen.” It was a name given to Alan Scheurman in 2010 during a pilgrimage with a Wixatari (Huichol) family to Wirikuta – the sacred desert where Peyote originates. Scheurman grew up in the Detroit indie music scene and moved to Brooklyn following a spiritual awakening in 2007. There, he contributed to the founding of an intentional community and educational center called the Golden Drum under the guidance of shaman and spiritual teacher Maestro Manuel Rufino.
Scheurman spent the next seven years centering himself in shamanic rites and initiation making frequent pilgrimages to visit and study with elders in North, Central and South America. Scheurman’s brand of psychedelic folk is the direct result of total immersion into ceremonial living.
True Prayer is Scheurman’s debut album under the moniker Santiparro. The result of a wildly successful Kickstarter campaign, True Prayer pushes past the typical psychedelic boundaries to penetrate the mysteries of the spirit world and the outer reaches of an expanded consciousness. The album is blessed with guest contributions from Will Oldham (Bonnie ‘Prince’ Billy), Kyp Malone (TV On The Radio), Adam Wills (Bear In Heaven), Melati Malay (Young Magic) and Ben Bromley (NewVillager).
Ghettoblaster recently caught up with Scheurman to discuss True Prayer, which was released via Gnome Life Records on February 24.

When did you begin writing the material for True Prayer?
Some of the songs are about six years old, though most of the record is pretty fresh.
What was the most difficult song to take from the initial writing stage through recording and mixing?  Why was it so troublesome?
“The New Baktun” because it was a lot of people’s favorite who had heard it from the beginning.  I re-recorded it several times to try to capture the spirit of the song.
Which of the songs on the record is most different from your original concept for the song?
“Total Freedom” wasn’t originally imagined as such a rocker.
You had some amazing guest musicians play and sing on the record.  Tell us about how those came about?
Well, they’re all friends of mine.  I recorded the second half of the record in the house where Young Magic lives and records.  Adam Wills and I have been attending spiritual ceremonies together for years.  There’s already been a history of collaboration with Kyp and I.  I didn’t know Will that long before we worked together.  I first met him in a dream while finishing up a plant dieta in Peru.  Two days later I went to his show in NYC and gave him some Palo Santo. It was a really brief but deeply cosmic meeting.  He asked me if I was releasing any new music, as a mutual friend had already turned him onto my previous band Ka.  I said that I was considering it and he looked me in the eye and said something like “you should be recording music and releasing it prolifically.”  So, needless to say, it lit a fire under me and when I launched the Kickstarter Will was one of the first supporters.
Who produced the record?
It was self-produced.
Is there an overarching concept behind your new album that ties the record together?
There are themes on the record though the songs were not written with the intention to weave a story together.  After it was all recorded those themes became apparent.  It’s a record that takes a cosmic approach to very deep questions and really reflects on the wisdom imparted by the native elders I learned from over the last seven years.
Have you begun playing these songs live and which songs have elicited the strongest reaction from your fans?
People love “Rainbow In The Night,” “Total Freedom,” and The New Baktun.
(Visit Santiparro here: http://www.santiparro.com/.)