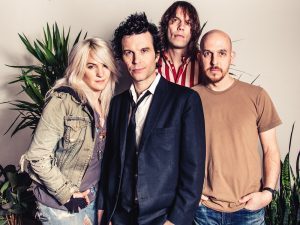 Although a part of the modern-day New York scene, 1-800-BAND belongs in spirit to the New York of the late 1970s – the “concrete streets and soaring buildings of the vicious city… torn pantyhose, cracked windshield, lipstick…”, in the band’s own words. New EP Diver Blue’s four nuggets of keyboard-driven bliss might sound at first like anthems of sunny summer beach parties and suburban high school proms, but they are in fact the fever dreams of denim-clad rockers, prowling the streets on the hottest night of the year. It is the eve of the 1980s – punk’s first big boom is in the rearview, the New Wave is still swelling, and 1-800-BAND is on the cover of Circus Magazine.
WFMU has described the co-ed quartet’s songs as “power-punk-pop gems” and Time Out New York has called its turn-of-the-decade vibe, “sticky-sweet power-pop”. Journalist and DJ-about-town Doug Mosurock wrote of 1-800-BAND on his Still Single blog: “The sort of thing you might have found on a major, back between 1978-81, somewhere on the shelf between The Beat and The Cars. Recommended.” The Cars is indeed an apt reference point, residing in the limbo between blue collar 70s rock and the turbo-charged electric torque of the 80s to come. 1-800-BAND – frontman Al Huckabee, keyboardist Polly Watson, bassist Robbie Kongress, and drummer Aaron Carroll – owns that limbo, bottles of cheap red wine in hand.
Diver Blue was produced by Kevin McMahon at Marcata Recording, the studio originally founded by The Walkmen. Chief engineer at Marcata since 2003, McMahon has engineered and mixed albums by The Walkmen, Real Estate, Titus Andronicus, Swans, and more. Diver Blue was mastered by Carl Saff (Guided By Voices, Unsane). The EP follows a self-titled LP and a split 7-inch with Snakes.
Ghettoblaster recently caught up with vocalist, guitarist Huckabee to discuss the record.  This is what he said about it.
When did you begin writing the material for the EP?
Writing songs isn’t a problem for 1-800-BAND. We were off and running with new material for this EP even as our first LP was at the pressing plant. Like any band we have our own challenges and problems but a shortage of song ideas has never been among them.
What was the most difficult song to take from the initial writing stage through recording and mixing?  Why was it so troublesome?
I’m not sure but I can answer the opposite of the question: “Diver Blue” was the one on this record which seemed to spring forth fully formed. There are some songs, some recordings, that you labor over and some that pop up like a piece of toast. With “Diver Blue” we all had fun with it from the beginning so it was easy to write and easy to record.
Which of the songs on the record is most different from your original concept for the song?
“Here Comes Summer,” because the structure of the song is just simple guitar rock n’ roll (what we call “pinky rock,” because your pinky never gets a break). I thought that was going to be some Chuck Berry or Replacements-sounding thing but once Polly added her keyboard parts the song went in a cooler, stronger, more unique direction.
Did you have any guest musicians play or sing on the record?
No but there were a lot of guest magicians in the studio when we recorded.
Who engineered, mixed, mastered and/or produced the record?  What input did those people have that changed the face of the record?
Kevin McMahon recorded and mixed the record. He’s really talented and I wish I could tell you specifically how his input helped but he does a lot of his work in a black box. He won’t tell you which channel is which amp so it forces you to give up some of your preconceived notions. He’s got his own way of doing things but he makes great recordings. Carl Saff mastered it and did a killer job as usual.
Is there an overarching concept behind the record that ties it all together?
Yeah: life is short, have fun!
Have you begun playing these songs live and which songs have elicited the strongest reaction from your fans?
“Many Happy Returns” gets a cool reaction – it’s a pretty big, sweeping song and most of our tunes are very poppy so this one stands out as being sort of grand in scale. Fans tell us it feels cinematic and it’s fun to have something that feels big and elemental to close a set with.
(Visit them here: http://www.1-800-band.com/.)