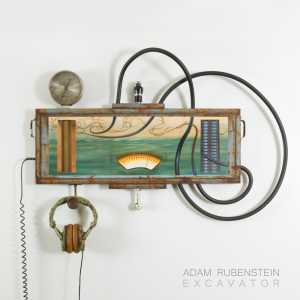 Nostalgia is a uniquely human feeling. We often get that urge to open old boxes or sift through photos from our past in search of some indefinable clarity or perspective. Adam Rubenstein’s newest offering, Excavator (due for release April 23, 2013 via Arctic Rodeo), was born of a similar experience.
A day spent exploring old hard drives, discs, notebooks and even cassettes left Rubenstein feeling both shocked and disappointed at how much material he had written, yet never properly recorded. It seemed like there was always an excuse or another musical project occupying his time.
Fortunately, this realization got Rubenstein back in the studio to flesh out many of his unfinished ideas. While some of the songs on Excavator are new compositions, others stretch back as far as a decade ago, when Rubenstein was fully entrenched in his heralded on-and-off-again band, Chamberlain.
Throughout, the musicianship retains the impeccable standards set by Rubenstein’s past work with the influential Chamberlain, particularly his signature guitar work. Among the musical friends lending a hand on the album are members of Chamberlain, My Morning Jacket, Fiction Plane, and Angus & Julia Stone.
Ghettoblaster caught up with Rubenstein to discuss Excavator recently and this is what he told us about it…
When did you begin writing the material for your most recent album?
Some of these songs date back almost a decade. I decided to call the album Excavator because I had to, in a way, unearth a lot of old material that I never found the time to record.
What was the most difficult song to take from the initial writing stage through recording and mixing?  Why was it so troublesome?
I’d say “Count On Me” from a lyrical standpoint. It’s a song about coming to terms with your own self-absorption, and a sometimes inability to pay attention to the people around you that really matter. I ended up taking a very long time coming up with the words, because few of us like to sit down and take a hard look at our own shortcomings.
Which of the songs on the record is most different from your original concept for the song?
Probably “Caverns.” I envisioned it would become a big rock anthem, and it ended up more off an acoustic driven, road-trip type song. It tells a long and rambling story that required a more subdued backdrop.
Did you have any guest musicians play or sing on the record?
I’m lucky to have had some great friends play on the record. Carl Broemel & Tom Blankenship from My Morning Jacket play pedal steel and bass respectively on a couple tunes, Pete Wilhoit from Fiction Plane plays some drums, and Rob Calder from Angus & Julia Stone’s band plays bass as well.
Who produced the record?  What input did that person have that changed the face of the record?
I produced the record myself. I did however have my friend Mickey Alexander assisting in almost every phase of the process though. Like most people, I’m often uncomfortable singing into a pop filter and wearing headphones. Mickey did a good job coaching me through that process, until I would sing naturally and with a bit of reckless abandon.
Is there an overarching concept behind your new album that ties the record together?
Not at all. That’s mostly because the songwriting process spanned over so many years. Some relationship songs, some self-inspection type songs, and a couple politically tinged ones.
Have you begun playing these songs live and which songs have elicited the strongest reaction from your fans?
Just a couple times thus far. I’ve gotten some specific complements about “Playground.” Perhaps it’s because I put down the guitar and play ukelele on that one, or maybe because it’s a very relatable song about a reluctance to get older. “I’ll Retrieve” also seems to go over well, as it’s got the most juice behind it.