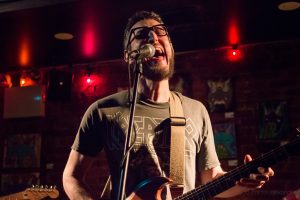 On Adam Rubenstein’s recent solo European tour, he arrived at a show a few hours early, loaded in his equipment, and plugged in everything on stage. As he made his way to the bar, he was stopped by a woman carrying a guitar case. “What are you doing?” she asked. “I’m playing here tonight,” said Rubenstein. Confused, the woman replied, “Well that can’t be. I’m performing tonight.” As it turned out, Rubenstein had set up his gear at the wrong club — a career first. The smaller venue he was booked at was actually across the street.
Embarrassed, he quickly gathered his things and, now rather late, hurried to the correct location. For more than a decade, Adam was the principal songwriter for indie favorites Chamberlain. With the support of his four bandmates and a healthy stable of fans, they released three acclaimed albums and navigated their way through many successful tours free of complications and wrong addresses.
Now, as a solo artist, the landscape has changed dramatically for Rubenstein, who admits he often feels lost as he thumbs his way through uncertain territory. One could argue the opposite judging from Rubenstein’s third solo album, Nightly Waves, due out October 16 on Arctic Rodeo Recordings. This powerful and diverse group of songs proves he’s doing something right.
Coming from an unlikely place of contentedness, these songs have all the emotional force of the songs he brought before them, but show that he’s not content to rest on his laurels or in a place of complacency.
Look for Adam on the road this fall. He begins yet another tour of Europe on October 16 — if he can successfully find his way there. And if you are in New York on September 29, he’s playing an unofficial album release at the Mercury Lounge.
Ghettoblaster has the pleasure of debuting one of the album’s slow jams, “Common Home,” that conjures perfect pop fare and expert, experienced balladry in equal measure. Enjoy it here: