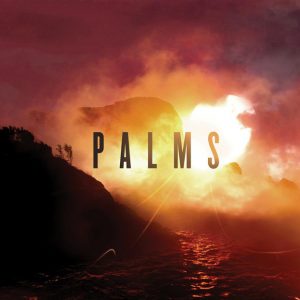 Palms, the Los Angeles-based band featuring members of ISIS and Deftones came together following the demise of ISIS, with Jeff Caxide (bass), Aaron Harris, (drums) and Clifford Meyer (keyboards/guitar) electing to continue playing music together.  Naturally it wasn’t long before the band was garnering the attention of music press.  Spin said Palms “is the slow-orbiting-rocket float of Oceanic-era ISIS painted in soft colors, now with the gushing, soaring melodies that would work on an older sibling’s mixtape next to Cure, Echo & the Bunnymen, US, or Depeche Mode.” Alternative Press awarded the album four stars, Revolver described the release as a “dreamy, swooning… masterpiece,” and Decibel ever-so-accurately described the record by saying “this feels very Los Angeles – Michael Mann’s Los Angeles – pulsing with strange, isolated life and beauty.
Ghettoblaster whole-heartedly agrees with all of the above, so it was a no-brainer to pursue Aaron Harris to ask some questions about the band’s debut (for Ipecac) while the band prepares for their first live shows ever.  This is what he said about it…
When did you begin writing the material for Palms?
It’s hard to remember but I believe it was about two years ago. Spring time 2011. That’s when we starting jamming and writing material.
What was the most difficult song to take from the initial writing stage through recording and mixing?  Why was it so troublesome?
Honestly none were that challenging. If I had to pick one I’d say “Mission Sunset” because of its length and many parts. Chino decided to start tracking vocals with that track because he figured if he could do that one he could do the others, ha ha. He’d never tracked vocals to a song that long before.

Which of the songs on Palms is most different from your original concept for the song?
That would be “Shortwave Radio.” We revisited that one after the other songs were written because we thought we could make it better. I changed my drum beat and we changed a couple of the arrangements around.
Did you have any guest musicians play or sing on the record?
No we didn’t. That would have been fun, but we had a hard enough time getting all of our stuff done in time. We talked to Adam Jones from Tool about playing some guitar on the record, but there wasn’t enough time.
Aaron, you’ve done a lot of production work since the demise of Isis.  Did you apply that knowledge to Palms and did you step in to more of a producer role?
Yeah it’s been my main focus since the ISIS split. I really love it. I’m still able to be really creative and help other achieve their sound. I was really happy that the other guys had trust in me to do the record. My only concern was keeping perspective with these songs after hearing them so many times. I was really careful of that. The record was produced by the band as a whole, but I recorded and mixed the record. In a way, I produced in the mixing. Producer is such a confusing term and often abused I think.
Is there an overarching concept behind your new album that ties the record together?
I think so. We left that up to Chino and didn’t get involved with what he was saying really. I think he had a feeling with the record and there’s a slight concept there. Musically I think the record is influenced by our lives and surroundings. Living here in southern California is really great. I think it would be hard to be impacted by this place.
(Palms are streaming their self-titled debut album (June 25 release via Ipecac) in its entirety via Spin (http://www.spin.com/articles/stream-palms-debut-chino-moreno-isis-deftones/).
Palms is available for pre-order both in its digital form, with pre-orders gaining immediate access to a download of “Tropics” (https://itunes.apple.com/us/album/palms/id644888681), and in a variety of physical pre-order bundles that include limited edition vinyl, t-shirts and posters (http://www.bluecollardistro.com/categories.php?cPath=1657).
The band play their first live dates in July with a four-date west coast outing, followed by a performance with System of a Down at the Hollywood Bowl on July 29:
July 10     San Diego, CA     Belly Up Tavern
July 11     Santa Ana CA     The Observatory
July 12     Los Angeles, CA     The Troubadour     SOLD OUT
July 13     San Francisco, CA     Slim’s
July 29     Los Angeles, CA     Hollywood Bowl     SOLD OUT)