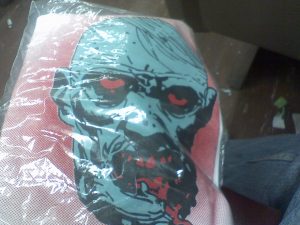 It has come for brains! Also, for like colors and colorsafe bleach and tumble drying on the low setting.

ZOMBIE
In a world where experimental electronic music exponentially splinters into a multitude of rogue genres that slowly shuffle the globe from demilitarized dance floors to sleeper cell bedroom studios and back, a team of disparate scientists tracks this solanum-like pandemic while desperately trying to interpret cryptic field recordings of Samhain’s past, not one day at a time, but from Amen to Zombie…
Yes, yes y’all.  Back from the dead so to speak.  Yours truly has spent a week in Boston, Mass soaking up the Halloween culture.  And if you could have the cold hand of death guide your dart as you threw it at a map of the U.S. when deciding to take a Halloween themed vacation, Boston would surely be at the end of your blood soaked dart…  Anyway, Halloween in Boston and in Salem was a treat.  The commuter rail station at the North End is a site to see on the 31st. As well as just about every other line in Boston,  just filled with people partying in costume.  And Salem?  You have to see it to believe it.  The costumes are amazing.   Just a short 30 minutes over dilapidated industrial landscape, peppered with New England spooky wooded glens and swamps and you arrive at the train station just outside of town.  I missed my first train making my way back into Boston, and I got to spend a nice peaceful time staring at the full moon and hearing all of Salem celebrate in style the daemons in all of us.  My only real souvenir of my trip was a completely awesome T-shirt I bought in Salem, which you can check to the left.  Amongst all the witch and pumpkin themed schwag available, buried in a row of street venders offering palm readings, that’s right.  I managed to find a zombie themed souvenir T-shirt.  Which is about the most awesome thing in the whole freaking world.  So slightly wrong headed as to be completely ridiculous.  And slightly sad I guess.  There is no reason in this world that it would be necessary for a town like Salem to put a zombie on a T-shirt, other than to try and sell it to a tourist.  Confirming our worst fears: humans will set about in witch trials to try and ferret out the weaker zombie ilk.  Trying to rob them of their cash to try and sustain a failing community of middle-class people who’s one chance to celebrate their heritage just so happens to be a black mark on their consciousness and a huge raging, awesome party.  I’m still going to wear the T-shirt.  I’m from Pittsburgh, Salem ain’t got shit on us!  At least zombie-wise, that is.

So we continue with our look at some of the guts and bolts of Halloween ambience.  Try as I might, could not bring back to Cleveland any Boston/Salem specific CDs.  I was really looking forward to not only go shopping for them in a different part of the country and see what I could find, but how great would that be to rummage around in the Salem Goodwill and maybe find some home-made spooky sound effect tapes!  But the only CDs I could find were at CVS and reviews of them have already been displayed by your computer’s pixels.  Yea, that’s right.  I wrote guts and bolts.
This time around we have:
Scary Stories Around the Fire with Uncle Guts
“Hang on to your neighbor as master storyteller Uncle Guts takes you on an unforgettable journey into terror.  Do you dare listen?  Or will you run away?”
The disc also comes with an awesome activity book.  Not actually with the insert, but as Word files that you can print and use.  Mazes, Halloween masks, and word searchers, you get the idea.  Great for kids or ESL students, but come on.  You can break out the crayons once a year and color a Dracula, mask day-glo purple and yellow right?
On the disc are 6 stories that you’d expect to find coming out of the mouth of an weird old uncle as he tried to entertain three kids ranging in age from 6 to 12.  Uncle Guts kind of sounds like a grandpa instead of an uncle with his coal miner, New England-er, Irish, old man on a rocking chair, squeaky accent though.  And the kids are idiots.  Child actors are rarely good, and when you take away the visual aspect of a cute kid saying something like “There’s, like, nothing to do!”  you just have three awkward kids trying to sound like adults as Uncle Guts tries to scare them with some Halloween standards.  But, I still think the choices all have some pretty maniacal characters. Here they are in order:
The Monkey’s Paw – You may remember this one from the second installment of Treehouse of Horror.  A family gets the paw and gets three wishes.  They’re poor, as the people are in these types of situations, so not only do they wish for the usual things (money, bringing the dead back to life, etc.) and manage to fuck up every wish.  They don’t even use their last wish.  This is the way it goes:  Your first wish is to make the monkey paw only grant pure non-Catch 22 wishes.  Next of course is to wish for unlimited wishes.  That’s all you need do to reap the benefits of this wish giving monkey’s paw and avoid learning the lesson of “You pay for what you get.”  Not a strong start but I swear they get better.
The Legend of Sleepy Hollow – Jheeze, how long is the original story?  This is the longest track on the disc.  You can find a synopsis elsewhere.  I will say that the story is a rather hodge-podge of story lines that a drunk would try to string together in hopes that someone would just buy him or her a PBR and they could be on their way.  But a story of narrow escape and head throwing is pretty cool.  Uncle Guts also uses the term “spirited away” to describe Ichabod’s transformation into the Head-less Horseman.  Not sure if that term was used in the past but I wish we could start using it again.  Also a great movie.
The Birth of Frankenstein – The story of a grave-robber.  Uncle Guts describes how Dr. Frankenstein convinces himself that dismembering corpses is cool.  Which it is.  What is not cool, is not finishing the rest of the story.  The part where Frankenstein goes to the disco.  Also Uncle Guts says something to the effect that Dr. Frankenstein is acting “like” a thief.  Either you are or you aren’t.  Great lesson for the kids to stew in while they try to sleep.  “Well, if stealing nearly rotting body parts is only a little-white-steal, then I guess stealing money from mom’s purse isn’t so bad.”  Also, fuck you candy commercials for giving our kids diabetes.
The Hitchhiker – A doctor picks up a young woman after heading home from a dinner party.  What’s kind of creepy is that Uncle Guts describes the young teenager wearing a “thin party dress” before the doctor lets her in the car.  Have I been re-desensitized into thinking that that kind of smacks of date rape?  Whatever, another classic.
The Log Cabin – Pioneers get sick, wife dies, description ensues.  We’ve been hitting most of the Hollywood monsters with this disc.  I’ll let you guess which monster shows up in this story.
The Story of Count Dracula – Saved the best for last.  This is the Bram Stoker version.  The origin story.  Not the crazy Dracula jumping around time and space and having fun.  No, this is the brooding twisted Count.  The story is also the most complete in it’s attempt to curve the story arc down to the ground and end the story proper in 9 minutes.
The disc ends with the kids a little shaken up, but no worse for wear.  All and all just a cute CD that your young cousins might like.  I’ll end on the note that on the back of the jewel case it advises the shop keeper to file this CD in the Halloween section.  Oh, if only… what a wonderful world it would be…
Goodnight out there, whatever you are.