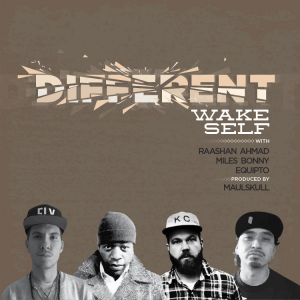 Albuquerque emcee Wake Self is a seasoned vet at this point. With opening slots for notable acts such as Dilated Peoples, Jedi Mind Tricks and De La Soul, tours across Europe, a solo albumcalled The Healing Process, and preparation of his upcoming new album, he’s been busy to say the least. New single, “Different,” features Bay Area legend Equipto (Andre Nickatina/Bored Stiff), fellow Oaklander/member of Crown City Rockers Raashan Ahmad and singer Miles Bonny. The song talks about staying true to yourself and avoiding mainstream ideals. MaulSkull, who produced Sleep’s last album and works with Sadistik, also produced the beat.
“I address rappers not thinking outside the box, and how the industry standard is continually rehashing the same subject matter for a quick buck,” Wake explains. “Raashan illustrates a familiar scenario for most rap cats who dreamed of being an emcee growing up and wanting to be like your favorite artist, until you finally understand being yourself is what’s important. Equipto really says a lot in his verse and goes into how the true artists in hip-hop are the ones who are really preserving the culture regardless of what’s popular.”
“Wake’s wordplay, delivery and selection of words to rhyme with always impress me,” Equipto adds. “He’s a dope emcee. He expressed how he felt about the rap game being the ‘same old, same old.’ I also agreed, but I wanted to put a balance to it. Maybe looking at it by saying without that weak same ‘ish’ out there, our job and responsibilities aren’t as important. We have to make the most of our opportunity on the microphone.”
Check out www.wakeself.com for more information and for the free download.