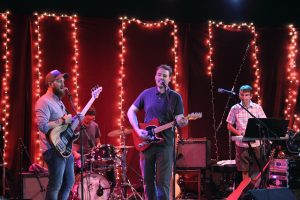 Cincinnati’s The Mitchells are a bit of an enigma. Tempering experience with classical performance and a history of performing in some of the region’s most celebrated independent rock bands with a deep, nerdy love of studio trickery and gear, the acoustic/electronic hybrid is organic, subtle and mysteriously hooky. Not quite a full-blown orchestral band, with hints of jazz-leanings and with a foot still placed in the world of indie rock, the band is winning over fans one at a time with their fresh approach.
Ghettoblaster recently spoke with band namesake Joseph William Mitchell about their new, self-titled record, playing festivals like Bunbury, beer and “dad rock.”
How would you describe the band in the context of the larger, indie landscape to people who haven’t heard you?
We jokingly call ourselves the inventors of Dad Rock, music that is a momentary quiet escape from the noise of the day. I think we sound familiar on first listen, pretty standard guitar-and-melody driven and organic indie, but the subtleties of melody, lyrics, dynamics, and orchestration come out over time. We don’t hit you in the face musically, but sometime after the second listen, something grabs you in the same way that a blatant guitar or melodic hook does in a more standard pop song. We don’t sound like Iron and Wine, but I think we have that same kind of subtlety that creeps up on you, and at some point you finally hear the massive hooks that are hidden in the music.
Marc Aiello is no stranger to Dayton, having played in Parker Ben Parker in the ‘90s.  How did he get involved in the band?
Nick (Mavridoglou, drummer) and Marc are neighbors and had been friends for years. They had a weird Guided By Voices bond that only GBV fans think is not weird. They had done some casual jamming around, and were familiar with each others’ previous bands and recordings. Last summer, when The Mitchells were starting to think about expanding and developing their sound, remembering the kind of distinctive yet subtle guitar lines that Marc had done in parker ben parker, Nick asked Marc if he would be interested in writing some parts. It all developed and evolved from there. Turned out to be a perfect match.
What was the reception for your debut EP like?
It was really positive. There was a lot of throw-back music stylistically going on at the time, on one hand, and a lot of electronic-hybrid stuff being experimented with also. I think the EP was refreshing in its simplicity and honesty. Apparently, that resonated with people.

The album took over a year to develop from start to finish?  What was involved in that process?
Yeah, the new album (The Mitchells) took a winding path to completion. We tracked most of the basic songs in spring of 2013. When Marc entered the band in the fall, we revisited the orchestration and arrangement on some of them, and also wrote a few new ones. Once December hit, we did a huge push to finish all of the basic tracks, and then did a few months of tracking on the new instrumentation layers and with guest artists. Some of it was done in the big studio (All Nighter Studio in Labanon), some at Tommy’s (Cappell, engineer) studio, and some in Marc’s small studio. It was a blast, being able to work through the details as a band to get to a recording that we’re super proud of. And that sounds just perfect on vinyl.
How does the LP capture the live essence of the band?
It has that subtlety that initially hides the huge hooks, and the orchestra-like dynamic range that spends most of its time hiding silently in the grass, then occasionally jumps out and bites you. That was a weird snake metaphor.
Really, on this album, the instrumentals are all built around the main guitar lines that I play. They’re not lead lines or rhythm parts, they’re more like arpeggios or vamps from jazz parlance or continuo from orchestral music. They sound simple, but are filled with complex strumming and picking and lots of feel. Marc’s guitar lines are written mostly to fuse with Joseph’s, not like a traditional rhythm/lead. Like, you may not notice them, but if you took them out, the song would sound totally bare. There are a few places where there are identifiable guitar lead lines, but we use those sparingly. They have greater impact that way. Snake bites.
Renowned blued guitarist Noah Wotherspoon plays on the album right?  How did he get involved in the record?
I had been in bands in the Dayton scene in the ‘90s and is generally a natural musical networker. He and Noah met back in the younger years and remained friends. When we were looking for some distinctive voices for the album, Noah’s slide genius seemed like a perfect additional to Willie Mays. We’re still just blown away every time we listen to it. Noah’s dreamy slide work give the song a real hazy, swirly, dreamy feel that blends all of the other parts together. He’s from another musical planet.
I noticed you guys are playing at Rhinegeist Brewery in Cincinnati.  Are you beer aficionados?  If so, if someone were to brew a namesake Mitchells beer, what would it be like?
We like beer. Some of us are more nerdy about beer than others, but on the whole, it’s not hard to catch us having a few beers together. We’re friends with a few of the guys at Rhinegeist and really wanted to play there. It’s just such a unique space, and the vibe in that place is so friendly and laid back (just like everyone who works there).
Mitchells beer, hmmm…actually, it would be like some of Rhinegeist’s beers. It would start off pleasant, not hitting you in the face, and maybe have you wondering why it isn’t more flavorful. But by the fourth or fifth sip, you start to get it. By the end of the can, you’re tasting all kinds of flavors that you didn’t notice at first. And then ordering another one.
The Mitchells have had the opportunity to play some pretty big deal events with national attention, like MidPoint Music Festival and Bunbury Music Festival?  What were those events like for you?
In one way, surreal. It’s obviously and honor to be selected and to share stages with some of the most respected names in the national and local indie scenes. In another way, we just treat them like another opportunity connect to people with our music, connect with each other on stage, and to just let go and enjoy the experience.
Do you feel challenged when playing for audiences that aren’t familiar with the band?  What do you do to win them over?
For sure. We put the music out front. We keep the banter to a minimum, give some insight on what the song is about, start off slow and quiet and slowly build the set to (sometimes) a too-loud-to-ignore finish that has the audience asking for more.
(Visit The Mitchells here: https://www.facebook.com/TheMitchellsMusic.)