When you know, you know. The moment anyone presses play on Microwave’s self-released debut album Stovall, they know. After months of (probably) holding their breath waiting to share the news, the Atlanta, GA-based four piece can finally tell the world that they’ve signed to SideOneDummy Records and will be releasing new music in the coming months.  Later this summer, they’ll play the inaugural Wrecking Ball festival in Atlanta, followed by a two-week tour alongside You Blew It! and Sorority Noise. All tickets are on sale now.
Stream Stovall via Bandcamp: http://microwavetheband.bandcamp.com

Today, the band celebrates its signing with a nod to the past. Singer/guitarist Nathan Hardy, an unofficial spokesperson for stepping outside the box, draws a significant amount of inspiration from unexpected artists, including ’60s singer-songwriter Melanie. “I first heard ‘Brand New Key’ when a friend sampled it for the chorus of a hip hop song he was working on a couple years ago,” explains Hardy. “It got stuck in my head all the time so I looked up the original version and now it gets stuck in my head far more than I care to admit.
Watch Nathan’s video cover of Melanie’s massive hit “Brand New Key” via Rock Sound: http://www.rocksound.tv/features/read/you-should-probably-definitely-listen-to-microwave
Blending elements of post-hardcore, emo and Southern-tinged indie rock, Microwave balance frankness with a penchant for wit, allowing for seemingly standard personal confessions to make a significant and striking impact. While often tipping into the heavier side of resonant punk, the band shines brightest in soft reservation. Their self-released debut album Stovall feels like a snapshot in time, bringing to mind that same unforgettable feeling that albums like Jimmy Eat World’s Bleed American, Manchester Orchestra’s I’m Like A Virgin Losing A Child and Taking Back Sunday’s Tell All Your Friends did years ago. 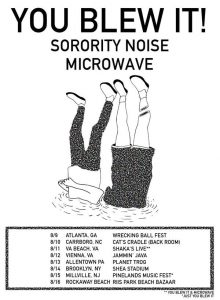