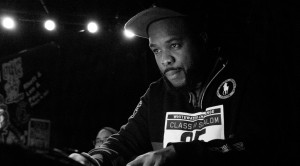 Brooklyn-­based deejay and producer MentPlus shares his debut instrumental EP, Stormy Nights. The six-track effort takes listeners through a variety of sounds steeped in his long history as a beat-­battle producer, and party starter in the Tri-­state area.
From the brisk opener, “Whispering,” to the J Dilla-inspired slapper, “Dillacation,” Nights celebrates Ment’s focus on becoming an instrumentalist. Inspired by the likes of The RZA, Diamond D, DJ Premier, Madlib, and Flying Lotus, the EP serves as a commencement of his revived musical direction.
When he was crafting the EP, Ment wanted to add his own sound into the fold. “There’s a lot of producers who want to make songs without words, but I’m trying to establish myself as an instrumentalist, a producer, and a deejay,” he said. Stormy Nights is my way of conveying my own sound while giving everyone a beat they can really sink their teeth into.”
The project is now available through all major digital retailers through High Water Music. It’s a prequel to a full, 20-track instrumental LP due out in the very near future.