TINY EPIC WESTERN (Gamelyn Games)
Well, howdy there, partner. You ain’t from around these here parts, are ya? Well, saddle up. We’re gunna talk about Gamelyn Games’ new one, Tiny Epic Western.
I’ve been a fan of the “Tiny Epic” series for quite a while now. These are small-box games that play in a half hour and have surprising depth of play. Notable entries in the series include 4x fantasy area-controller Tiny Epic Kingdoms and sci-fi dice masher Tiny Epic Galaxies.
With Tiny Epic Western, one can see that designer Scott Almes has improved at his craft in the years since the series launched. There’s a bit more going on with this one. The game is alive with its theme. From the wagon wheel layout of the play area to the characters’ special abilities, you can practically hear the spurs rattling.
At its heart, TEW is a worker placement game. Of course, like all such games, players have meeples (here called the “posse”) that they will assign to spaces on the play area to collect resources. Resources include law, force, and gold, and are used to purchase buildings where posse members could be placed in future rounds. These purchased buildings are also worth victory points.
Before you groan at the buzzwords “worker placement” (I’m getting sick of the mechanic, too), let me explain the ways in which TEW is different. First of all, many of the placement spots allow players to choose between taking either an immediate effect or waiting until the end of the phase. If instant gratification is your thing, you collect just a little something. If you prefer the long game, waiting til the end of the phase will result in a tastier reward than going for the immediate effect.
Unlike other games in the genre, cowpokes also have the option to duel if they want to try and steal a spot away from a player who has already placed their posse member there. The deluxe edition comes with four d6s that are shaped like bullets, for the purpose of gunning down your opponents. Dueling is mostly a contest of who rolls the higher number, with some opportunities to reroll or modify your roll. 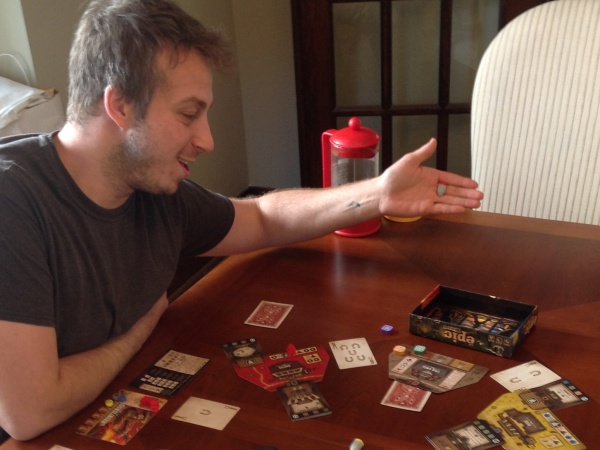 There is also this whole poker element that makes TEW quite unique. At the beginning of each round, poker cards are dealt face-up between each building. Players are dealt two cards. They pick the one they want and discard the other. After the placement phase, each player uses their poker card to make a 3-card hand with the cards on either side of any buildings where they have posse members assigned. Though the hands are typical poker fare—pairs, straights, flushes, etc—the suits are unique to TEW. Players compare hands if there is more than one posse member assigned to a building. If only one player’s posse in on a building, their hand is compared to that of the “rival,” a dummy player who also gets a card at the beginning of the round.
During the final play phase of each round, players make a 3-card hand out of their card and the cards shouldered on the sides of the building that matches their posse color. Whoever has the highest hand gets to advance one of three industries, which will give players bonus victory points at the end of the game.
Tiny Epic Western is played over the course of 6 rounds. Once players are acquainted with the rules, a game takes about 30 to 40 minutes.
I very much enjoy Tiny Epic Western. Fans of poker will certainly take the most satisfaction from the game, but even those who’ve never gambled can get into it. There are a few rules that I personally found a little shaky and weak, but for the most part, TEW is a solid game with smooth gameplay. Though I was hoping it would be my new favorite in the series, I’d rank TEW as much better than Tiny Epic Kingdoms, but not quite as good as Tiny Epic Galaxies. With Gamelyn’s Zelda knockoff, Tiny Epic Quest, coming to Kickstarter on October 28, we may have a new contender for best Tiny Epic game.
So YEE-HAW! Don’t miss out on this fun little game. It fits in your pocket and plays fast. You can’t really go wrong with Tiny Epic Western. I give it 4 out of 5 cattle prods. (Gamelyn Games) by Josher Lumpkin