THE NETWORKS (Formal Ferret)
From just filling the timeslots on cable access to landing ad spots for the country’s latest hit crime show, The Networks puts you at the head of programming. Will you bring in viewers by signing the biggest stars to host your sports shows or by developing large budget dramas or by unifying programming around a single genre? The choices are endless, but your budget is not!
As a game, The Networks is played over five seasons of quick single action turns from diminishing options. On a player’s turn they can develop a show, sign a star, land an ad, take a network card (game advantage), attach a star or ad to a show in their lineup, or drop out and budget to end their season. With the actions related to shows, stars, ads and network cards, each season only provides so many available cards to choose before the season change. As more turns are taken so are the better cards, leading to hard decisions on when’s best to drop and budget, giving you better positioning for the next season. After all players have dropped from the season, income and expenses from active cards are determined, show viewership is added to your total, shows age into their next season (usually with fewer viewers) and the cards for the new season are dealt. After five seasons the player with the highest viewership wins! 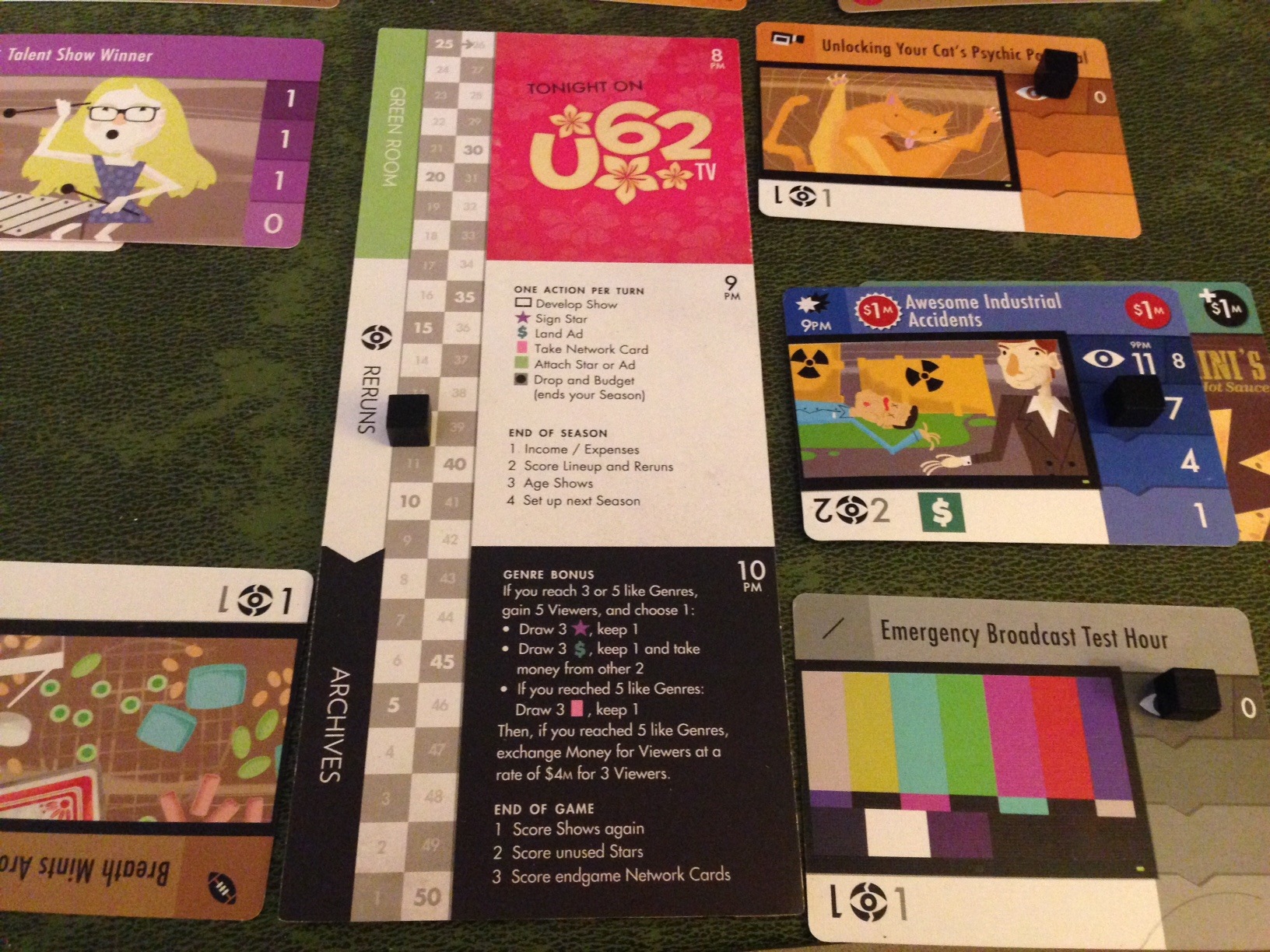 As a fan of thematic play one of the best things about The Networks comes from the genre bonuses. After programming the 3rd show of the same genre, players immediately gain five viewers and can draw and pick from a number of star or ad cards, and on the 5th show players gain 5 more viewers, can draw from star, ad or network cards, and can exchanged money for viewers. This rewards creating a network that makes sense in the real world. People watch ESPN because they like watching sports, SyFy because they’re interested in sci-fi shows and TLC because they… well, I don’t really know why people watch TLC.
As with most all games, the first few turns of The Networks may be a little rocky as you try to understand the different options and advantages that come with each available action. The rules aren’t complicated but the changing options that come with each season’s new show, ad, star and network cards take careful consideration. It’s just accessible enough that anyone who’s interested should be able to not get lost and just complicated enough that serious gamers have plenty to weigh out too. Tune in! (Formal Ferret) by David C. Obenour