By David C. Obenour
For a long time miniatures gaming has been relegated to a niche community within a niche community. Numerous expensive models were required, complicated rules took up multiple books, battles could last for entire afternoons and the hobbying aspect of assembly and painting was fun for some but arduous for others. It wasn’t true for all miniatures games, but it did seem true for enough to scare off lots of potentially interested gamers.
But in 2012 Fantasy Flight released the wildly popular X-Wing game – introducing many new (and impressing many old) gamers with a small dogfight game set to understandable rules, scalable playing times and cool looking pre-painted and assembled miniatures (if you’re following along, that checks all of the previous paragraph’s concerns). They weren’t the first, but with a wildly popular licensed product they quickly become one of the most successful.
So with more people playing or at least open to miniatures gaming we’re taking a look at two tall ship games available, starting with Ares Games’ Sails of Glory. 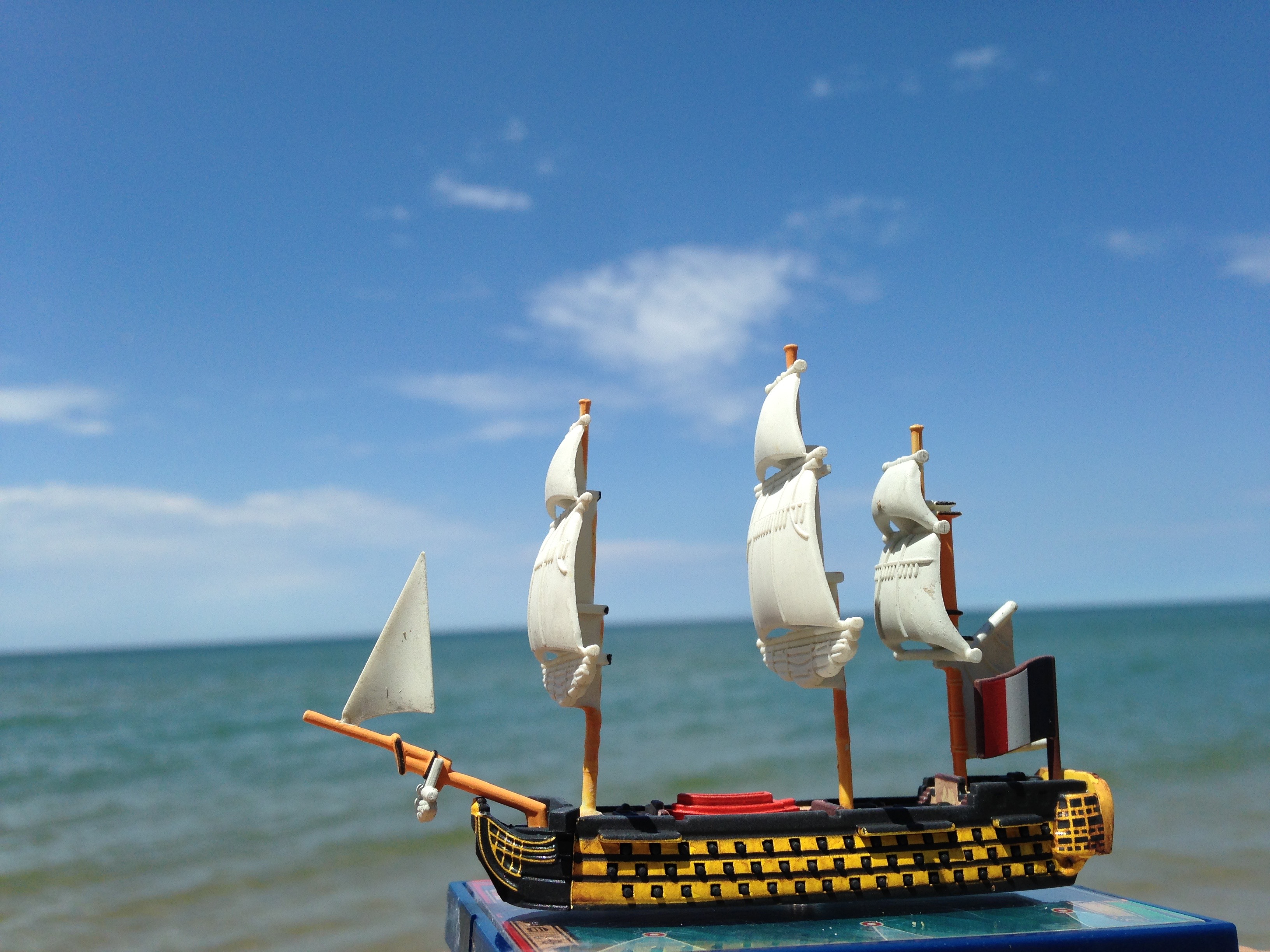 Other than Napoleon, the name most recognized from the Napoleonic Wars is Admiral Horatio Nelson. Releasing its initial line of miniatures from the ships of that era, Sails of Glory is a ship-to-ship tactical war game pitting admiral against admiral (or a number of captains against captains) for naval dominance.
The rules offer three levels of play for Sails of Glory: basic, standard and advanced. This is a great way to ease into the game and ultimately find your preferred balance of strategy versus simplicity as each level builds on what is established from before.
As recommended, for our first game we played the basic rules “Enemy at Sight!” scenario, a fairly straight-ahead battle using all four ships from the starter kit. The set up might initially frighten the casual gamer as the ship mat and log looks more complicated than it is for the basic rules and there are over 500 tokens that come in the starter kit, but again – most of which aren’t utilized for the basic rules. After the first couple of turns spent figuring out how the rules actually played out, Sails of Glory flowed easily. Movement is handled through a simple method of checking your ship’s attitude to the wind, picking from a deck of ship specific movement cards, and then putting the card in front of your ship. Combat range and damage is established with a color-coordinated measuring stick, measured from your stem stern or broadside firing arc – cross-referenced with your ship log to check for firepower (also one place where damage is taken, lessening your firepower with each sustained hit). For all of the game we weren’t experiencing within the basic rules, it was surprising about how much it still had to offer – to hold your fire in hopes of better positioning, the frigate’s mobility, ships-of-the-line’s firepower, being taken aback and trying to maneuver to a more favorable mast facing while avoiding your opponents firing arcs. It came down to a nail biting, one-on-one slugfest, decided with some fortunate (for me, anyway) damage tokens. 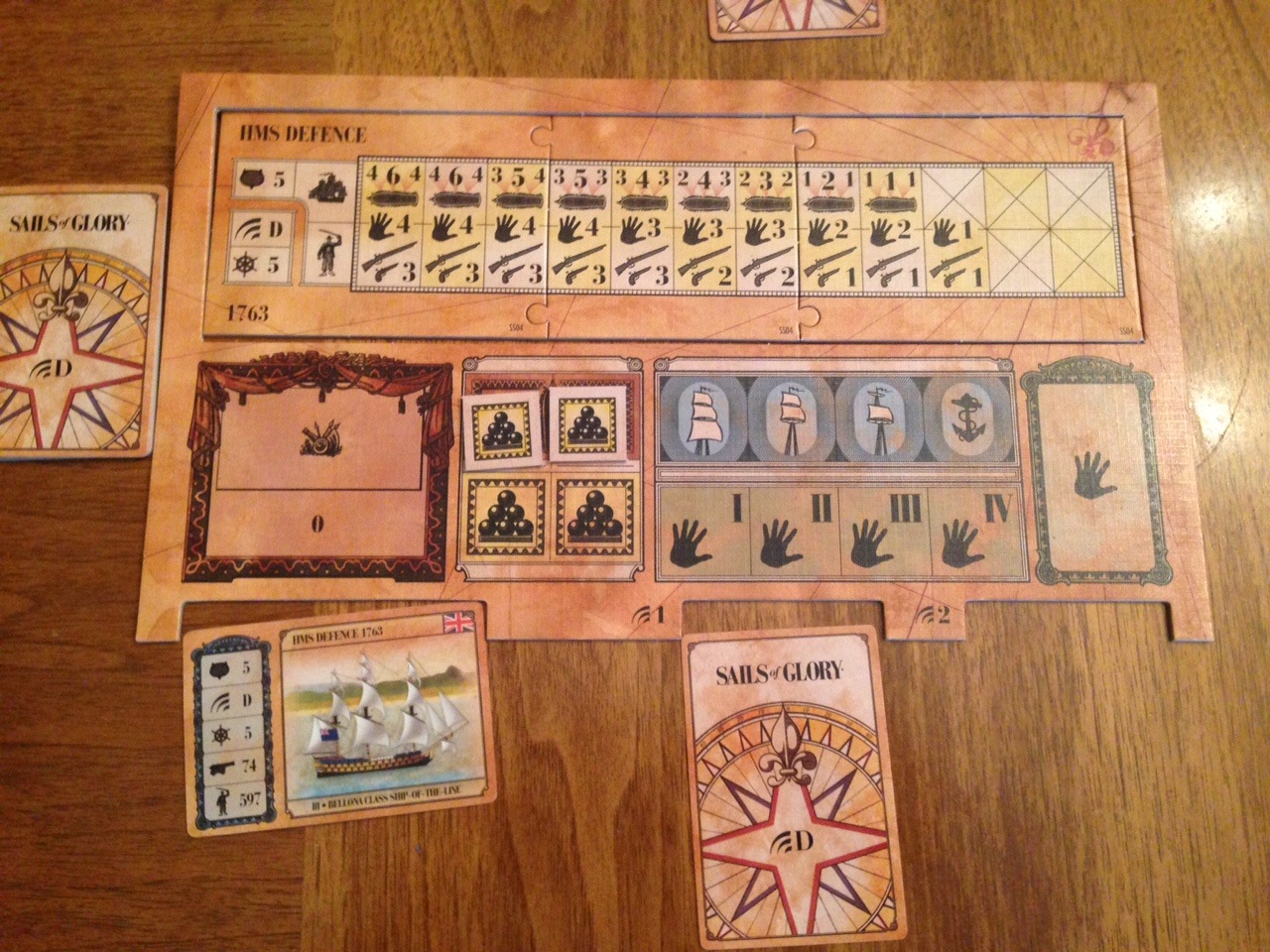 This is all just the tip of Sails of Glory’s (hope my ship doesn’t hit it) iceberg too. Standard rules offer different options for ammunition (ball, chain, grapeshot), additional raking shot damage, the time to react rule (planning maneuvers ahead within the restriction of a ship’s veer rating) and collision rules. Advanced rules offer crew action options, different sail settings and special damage tokens (fire, leaks and broken rudders and masts). There are also additional optional rules for boarding enemy ships and rules that deal with entangled masting, exploding ammunition, changing wind strength and direction, and much more.
It’s a definitely a lot, but the beauty is that you don’t need to use all of the rules to play a game. Instead of unloading all possible variables and situations on players from game one, you’re able to build and customize your experience.
Finally, the rules also provide a number of ready-to-play scenarios as well as guidelines for helping to design your own. As you buy additional ships, a point guide is available online to help balance your fleets. 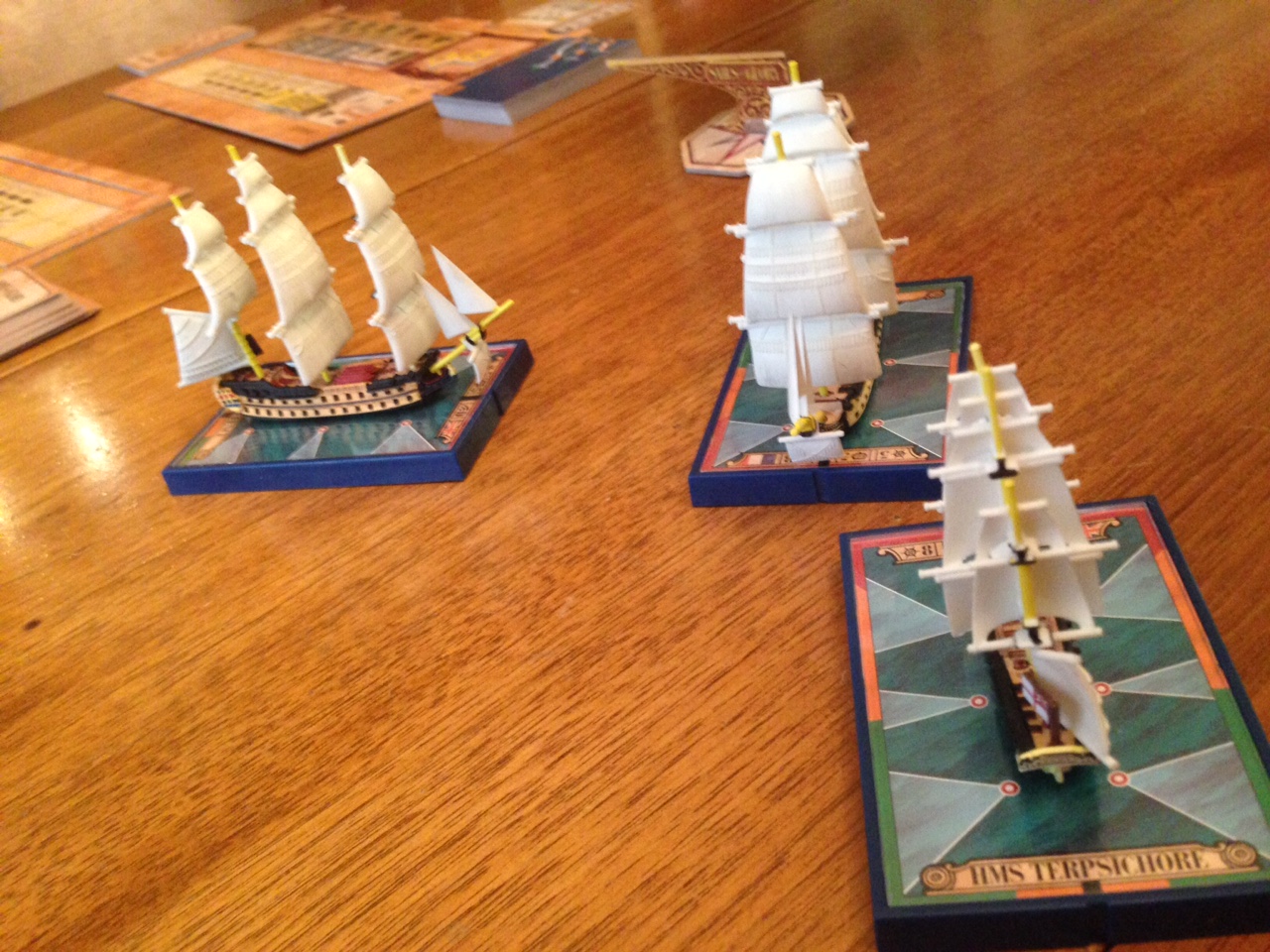 Throughout this review I kept wanting to just fanboy out about Sails of Glory. The ships are beautifully done and reasonably priced. The rules are fun to play at all levels of complexity and offer a game that lasts for anywhere between just under an hour to a weekend afternoon. They also seem keen on supporting it with continued space at their convention booths (having a single naval battle with over 79 “captains” at 2015’s Gen Con) and new ship releases, including a few US Revolutionary War ships making good on their promises to expand into new eras. The historical aspect will undoubtedly limit Sails of Glory’s appeal, but really shouldn’t for a game this well designed. (Ares Games) by David C. Obenour
Part Two will be coming soon, featuring Zvezda Games’ Armada Invincible.