AGE OF CONAN (Ares Games)
Robert E. Howard’s Conan the Barbarian inhabits a world completely void of the mundane. The rippling muscled champion set off on scores of adventures filled with treacherous villains, mesmerizing beauties, the fury of the wild, high-stakes politicking, countless treasure and much more. Tattered paperbacks transport readers to the heart of this swarm of sword and sorcery. It was awesome when it first came out over 80 years ago and it’s maybe even more awesome today.
Beautifully capturing this setting, Age of Conan provides another entry to this world as players take charge of one of the four main kingdoms vying for power and influence in the time of Conan. The game is divided into three ages, each comprised of four adventures by Conan. To start his first and each following adventure, players secretly decide on bids for Conan with their bidding tokens and strategy cards. The game then begins with the winning player taking control of the hero and rolling the seven fate die that will determine the next actions available to players on their turn. Turns unfold with military and diplomatic campaigns against the neutral provinces and other kingdoms, savvy collection of strategy and kingdom cards to amass benefits and the thoughtful guidance of Conan as he sets off on adventures. At the end of the fourth adventure, the age change phase gives players a chance to collect gold, build cities and raise troops, complete objectives, take control of artifacts and set up play for the next age. 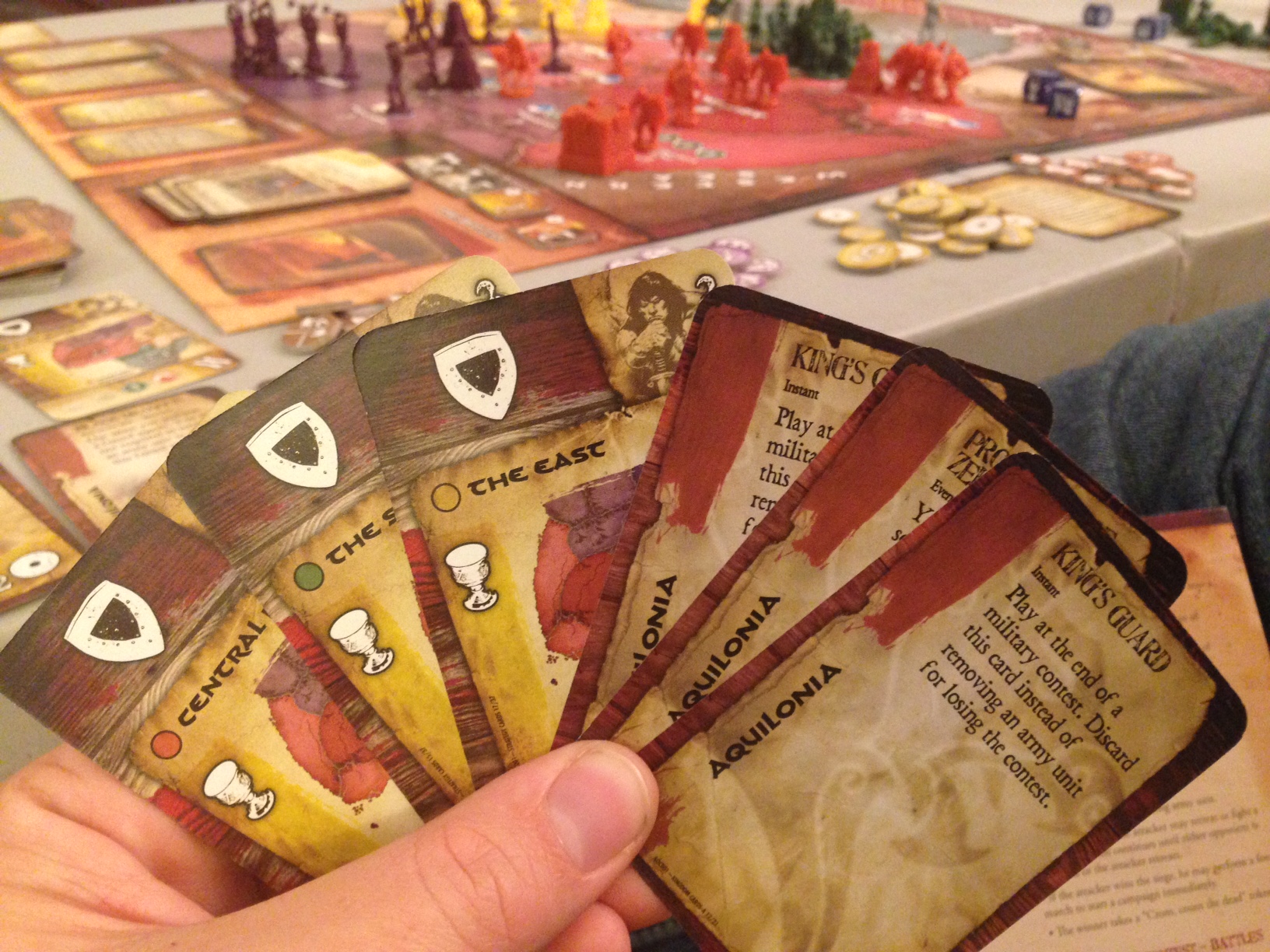 While that is a broad overview, the rules for Age of Conan are rather long and involved and it’s very likely your first game may take more than two or three hours after set up and explanation. Released earlier by Fantasy Flight (and experienced gamers probably already know what I’m about to say) the rules can be a little dense to navigate. They aren’t poorly written or particularly hard to follow, but something about their games always seems to take a little longer in the learning. Just have fun with it though and count the first play through as a learning experience.
The main disappointment for Age of Conan however is the titular champion’s limited role. While he can affect outcomes, often times he just seemed to wander about between starting location and his adventure’s goal. You can put out raid tokens and he can help your armies in battle but really, when you play a game with Conan in the title you want more Conan in your gameplay!
Thankfully, an expansion entitled Adventures in Hyboria is available. This expansion provides all of the flavor and adventure that thematic gamers will be looking for from Age of Conan. It introduces new, more interactive adventure cards for Conan, story cards that can alter the hero’s path and an evolving mood and experience track for Conan. It would have been hard to include all of these rules in the initial game, along with the introduction of spies and prisoners rules, but after you’ve mastered the core game’s rules, this expansion really is a must have. (Ares Games) by David C. Obenour