SONS OF ANARCHY: MEN OF MAYHEM (GaleForce Nine)
“Riding through this world… all alone.” But you don’t have to go it alone! Bring along two to three of your friends for the ride as you trade, steal and shoot out your way to club supremacy in GaleForce Nine’s sleeper hit of the year, Sons of Anarchy: Men of Mayhem.
I say sleeper hit because more often then not, licensed games rely on fandom as opposed to solid and inventive game design. This was my thought the first three times I passed by GaleForce Nine’s booth at GenCon, and was still my thought on the fourth, but it’s hard to pass an open play-test table at North America’s highest attended gaming convention. Lucky for me there was that extra seat, because Sons of Anarchy: Men of Mayhem just might be my game of the year.
Three to four players start off as club leaders for SamCro, The Mayans, Lin Syndicate, One Niners, or a special expansion-teasing club, Grim Bastards (extending play to five or six players – out next year). With a gang full of prospects and members, players send out their dudes to different sites in an effort to obtain guns, contraband and money. The hold up is, only one club can utilize a site every round, and in order to utilize a site, you have to first clear out all rival clubs. Guns aren’t just a commodity, after all.

While some of these core “worker placement” type games can suffer with well-established strategies upon repeated play, Sons of Anarchy addresses this concern by starting the game off with a limited number of sites and then providing an over-sized site deck that makes for new options each game.
But that’s not the only mechanic at work in Sons of Anarchy: Men of Mayhem either. Those throw downs for site control will also increase the police’s heat on your club, and the more heat you have the less contraband you’re able to move on the black market. Also, as prospects and members get gunned down in throw downs, players are forced to spend turn actions on recruiting new prospects and then again to patch them in as members. Your club has to have members after all, especially if the heat gets to high and somebody needs to take the fall!
If all of that wasn’t enough to consider, the Anarchy Deck lives up to it’s name by every turn offering up new opportunities, obstacles, hassles and “last calls” that set positive or negative turn’s end scenarios. 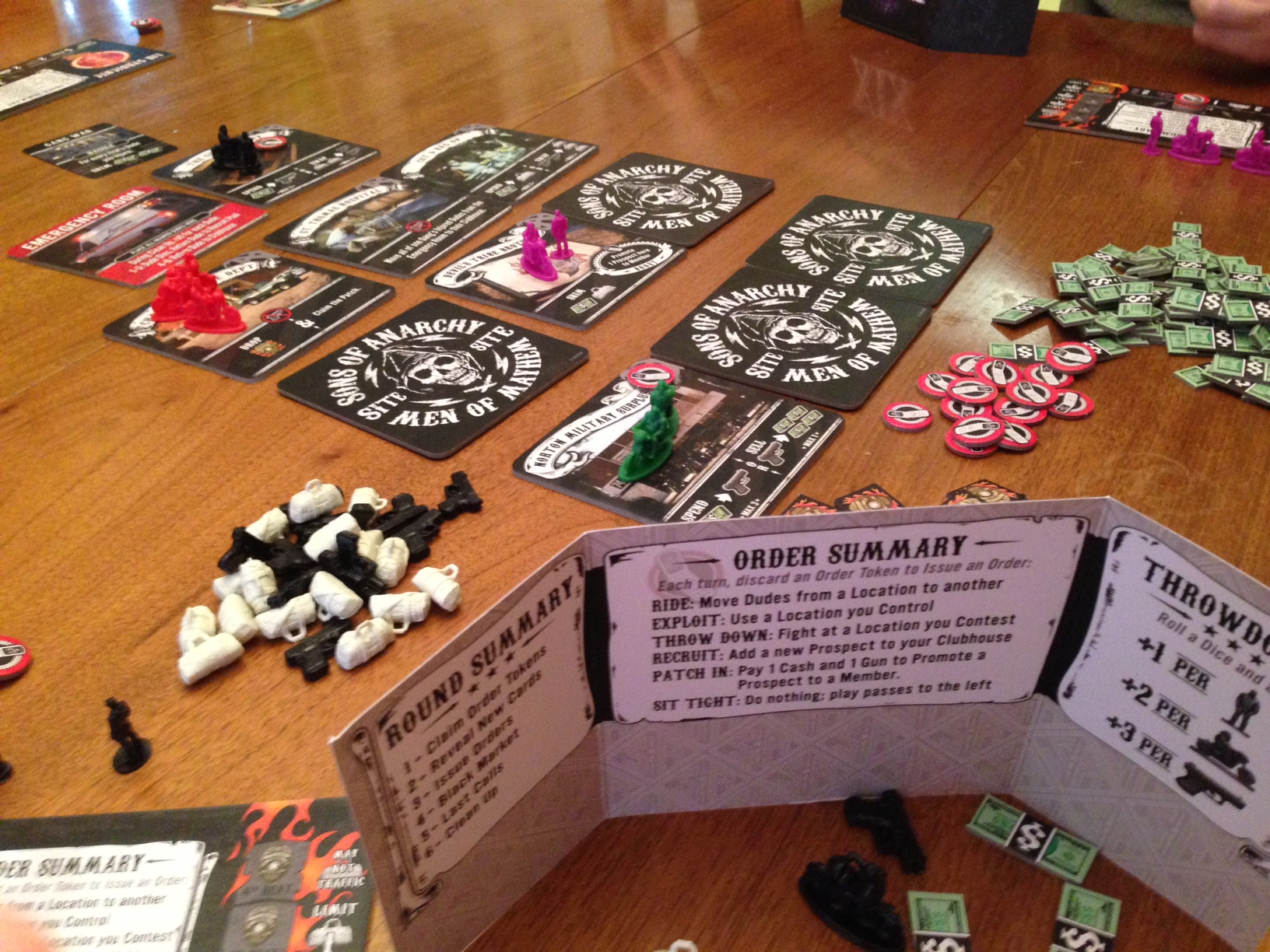 It’s all these various mechanics at work, along with their fluid interplay, that makes Sons of Anarchy: Men of Mayhem such an amazing game. Sure, it also does a great job of incorporating the characters and locations of the TV show but GaleForce Nine has created something that’s appeal will last far beyond Charlie Hunnam’s fourth Pacific Rim movie.
With other licensed games such as Spartacus and Firefly, maybe it’s time to give them a chance as well! (GaleForce Nine) by David C. Obenour