It’s that time of year again. Gamers the world over are nearly bursting at the seams in anticipation of “The Best Four Days in Gaming”™ at Gen Con 2014. Well, I’m not going. My decision to skip this year isn’t out of protest or anything of that ilk. It’s just a busy time of year, and I have other things to do. So I figured I’d post my super late thoughts on the 2014 Origins Game Fair, an event I actually attended.

I like Origins. A lot of gamers seem to think of it as an appetizer to Gen Con’s main dish.  Others describe it as a lesser convention. I don’t know if either perception is necessarily accurate. Columbus’ Origins has it’s own identity and a pacing that is very different from its neighbor in Indianapolis. My experience this year was a more relaxing one than any time I’ve spent at Gen Con. Granted, I wasn’t there on Saturday and heard that lines on that day only were nearly unbearable. Anyway, here are a few games I played and stuff I thought seemed cool. 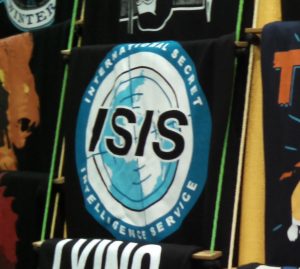 I saw this bootleg Archer shirt. It was probably funnier when ISIS wasn’t real and super scary. Organized murderers are the real monsters.

This year’s theme was monsters, so it was cool seeing Ninth Level get some attention for the full-color release of their beer and pretzels RPG Kobolds Ate My Baby! They also featured a quick and easy card game starring the same hungry kobolds from their RPG. A brief demo was enough to recommend a purchase. It was also nice hearing the occasional bellowing of, “All hail King Torg!” Things like that warm a gamer’s heart.

I spent some time with our Editor-in-Chief and Lead Designer at the Cool Mini or Not booth. They make some really fun games. Their price point seems a little higher than average, but that’s easily explained by all the neat plastic miniatures included. No cardboard standees here. Kaosball offers a unique update in the vein of Blood Bowl or Bill Lambeer’s Combat Basketball. It’s a two-to-four player board game in which your team can try to score the most points or simply murder the opposition. The core set comes with four full teams, all of which have beautifully designed (although unpainted) miniatures. Tons of additional teams are also available for purchase. Rivet Wars was their other game we demoed. It has elements of RTS games with two players building up armies that will ultimately march to their doom. If you’re the type of gamer who doesn’t mind a substantial initial investment for hours of fun in the longterm, you can’t really go wrong with Cool Mini or Not.

A four-player game of Kaosball in progress

As I’ve been building my WFB Skaven army, of course I had to pick up some bits. I managed to score some different sized bases that I plan to use in creating some unit-filling scenery, a few Dwarf victims, a Plague Priest, an older Warlord model, and a reasonably-priced Forge World Warlord on Brood Horror. The army is coming together nicely. Check back for studio updates and hopefully some battle reports.

I picked up what looked to be a trading card on the top of a trashcan. It turns out it was some clever advertising from illustrator Kelsey Cretcher. Her work has a very clean, almost storybook feel to it. Check her out if you want some drawings or design work.

Dead of Winter from Plaid Hat Games is a pretty cool twist on what could be a tired zombie trope. Two-to-five players try to get their group of survivors through a deadly post-apocalyptic scenario. Basic concerns like food, fuel, and ammo come into play. Most interesting, however, is that each player has her own secret objective. Victory conditions can be met for the team, but individual players can still lose if they fail to meet their secret objectives. Add to this the fact that one or more of the players may win by betraying the others, and things get very interesting. Votes to exile members of the community show that even in the midst of a zombie apocalypse politics still plays a vital role. There’s potential here for a huge amount of replayability.

Sticking with this year’s monstrous theme, RARRR!! by APE Games could be a great educational tool. It involves elements of betting, pressing one’s luck, and a whole lot of basic math. The demo was enjoyable, and the art style is a perfect fit for a light-hearted monster game.

My RARRR!! monster tearing shit up

White Wizard Games’ Star Realms just might be my favorite game of Origins 2014. It’s a two-player deckbuilding game in which each side attempts to build up their fleet while decreasing her opponent’s influence. Think Dominion or Ascension… only in space. Ships and bases belong to one of four factions. Some allow players to get rid of their basic cards, some allow for draws or forced discards, some build up for massive attacks, and others help replenish a player’s influence. The core set is fantastic, inexpensive, and has me very excited about future expansions. If this sounds even the least bit intriguing for you, be sure to grab a copy of Star Realms.

That’s that, I suppose. All in all, I had a pretty great time. I guess not everyone around me shared my perspective. I heard the comments, “I’d rather be at the Geneva Convention,” or “I wish this was Gen Con,” more than once at this year’s Origins. For all those gamers left longing a couple of months ago, it’s just about time for those wishes to come true. Enjoy the hustle and bustle, everyone! If you’re lucky or rich enough to play in the Cones of Dunshire charity event, then bully for you. Thank Adam Scott (or Ben Wyatt if he’s in character), and tell him that he’s a goddamn genius.