Taking its thematic inspiration from the excellent 2005 board game of the same name (you can check out our review at http://ghettoblastermagazine.com/2013/gamers-paradise-shadows-over-camelot-days-of-wonder/), Days of Wonder has released a fast and fun version of Shadows Over Camelot, aptly subtitled “The Card Game.”
WHAT’S THE SAME:
Players still take on the role of knights questing for the renown and protection of Camelot. These quests vary in their glory on whether you’re just beating back a horde of invading Picts or Saxons or whether you’ve gone out and slain a mighty dragon or found the Holy Grail. Players win together by accumulating this glory as quantified by the white sword markers.
At least most players win that way…
Another great aspect carried over from the board game is the role of the traitor. While cooperative style games are all the rage these days (as noted in our review of this year’s Gen Con at http://ghettoblastermagazine.com/2013/gamers-paradise-a-review-of-gen-con-2013/), both versions of Shadows Over Camelot stand out by offering this twist. Even more interesting, is it’s not always certain whether there will or won’t be a traitor. At the start of each games, players draw from a deck that has one more loyal card than there are players and only one traitor card (the remaining two cards are set aside).* Did your fellow player/knight make an honest mistake, or did they knowingly fail in that quest to blemish and weaken the kingdom, as quantified by the game losing (or game winning, for the traitor) black sword markers.
WHAT’S DIFFERENT:
Offering a faster and more easily accessible version of the board game, quests in “The Card Game” are completed all in the same manner as opposed to the varying set of poker hands from before. Each turn a card from the rumor deck can be flipped over. These cards depict one of the quests along with a number. To complete a quest, the total of these numbers needs to fall between 11-13. If it’s less than 10 or more than 14, you’ve failed.
That should be easy enough, right? Wrong! Because…
–      some quest cards have a “?” instead of a number and are valued at a building multiplied total.
–      Mordred and Morgan cards are shuffled into the rumors deck, doing things like adding additional amounts and multipliers to the quests, preventing you from talking to one another and making you count out loud as you draw each new rumor card.
–      sure, you can delegate certain players to keep track of certain quests, but who knows? Maybe they’re the traitorous knight. Best to try and keep tabs on as much as possible.
–      most of us haven’t used our minds this much for numbers and math since that gen ed course in college.
–      you’ve also been drinking all afternoon. You lush. 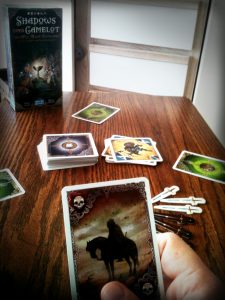 CONCLUSION:
Shadows Over Camelot: The Card Game does a great job of condensing what’s really fun about the original board game and doing so within a shorter gameplay. Sometimes you want something more involved and sometimes you don’t – this is for when you don’t. At the same time, the card game is also different enough from the original with it’s math and memory testing that it stands really well on it’s own. (Days of Wonder) by David C. Obenour
*the rules on the number of traitorous and loyal cards are slightly different for a 1 or 7-player game. See instruction manual for details.

Tags: Days of Wonder, Shadows Over Camelot: The Card Game