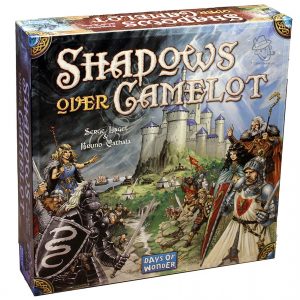 SHADOWS OVER CAMELOT
Having recently released an abridged card game of the same name, the folks at Days of Wonder sent over a reprinted copy of their 2005 board game Shadows over Camelot for review. It’s a cooperative game, meaning you all win or lose together, but with a unique twist.
The game play is simple to follow, each player’s turn consists of a single “Progression of Evil” event, followed by a “Heroic Action” taken by the player. The “Progression of Evil” options are what lend a sense of urgency to the knights’ quests, adding siege engines around the castle, amassing groups of invading Saxs and Picts at the borderlands and adding further strength and challenges to the active quests. For the player’s “Heroic Action” he battles back these evils by going out on a quest or defending the castle and borderlands.
Maxing out at 7 players (or 8 with the very reasonably priced Merlin’s Company expansion), these limited actions minimize downtime between turns and the cooperative aspect holds everyone’s attention until it’s their time to act again.
What really holds attention, and simultaneously makes Shadows over Camelot a great game, is the twist that not everyone playing is loyal to Camelot… at least maybe not. At the start of the game – no matter if you’re playing with 4 or 7 people – 7 loyalty cards are shuffled with one traitor card. These 8 cards are then dealt out one each, face down, with the remainder returning unseen to the box. Players with loyal cards take on the role of defending Camelot and retaining her glory, but the player dealt the Traitor card (if there is one) works against the other knights to bring about their demise. Is one of your friends working against you or are they just bad at this game? You can make accusations, but a false claim sows seeds of contention and, dare I say it, casts shadows over Camelot. 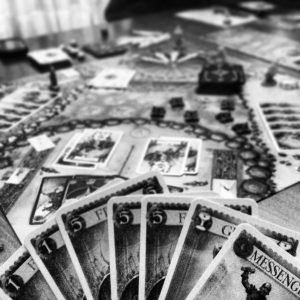 While the Camelot theme might turn off some of your more gaming-adverse friends (ie. less nerd receptive), the mechanic of having the knight’s quests completed through poker hands might win them back. Beating back the Picts requires a straight, defeating Lancelot takes a full house and jousting the Black Knight requires two pairs of two of a kind. When you can describe how to defeat a dragon through the more universally accepted world of gambling, it makes more sense to them and you look more cool – win-win!
For your friends who are gaming friendly, just tell them that Shadows over Camelot is a fairly classic cooperative game with the added subversion, mistrust and acquisitions of Are You A Werewolf? 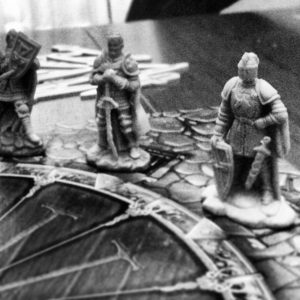 In the age of Ticket to Ride on “The IT Crowd” and Settlers of Catan on “Parks & Recreation,” I really am surprised that Shadows over Camelot game doesn’t have more of a following. It’s nerdy but not too nerdy, the mechanics are well balanced and compliment each other and it’s obviously been well play tested, leading to a number of nail biting finishes. Highly recommended. (Days of Wonder) by David C. Obenour