DRAGOON (Lay Waste Games)
For centuries you and your fellow dragons have rested peacefully on your remote island. Now, hordes of humans have started invading, building their villages and cities. It’s awoken something long slumbering in you. A desire for gold. A desire for power. If these insignificant men won’t give it willingly, then you will take it anyway and leave them with nothing left.
The turns for Dragoon are split into three quick and easy to follow rounds. First, the island is populated by rolling two dice – the red die represents rows on the board and the black die represents columns. These coordinates determine where the unworthy humans amass for that turn. Second, players take their actions with the last place player picking the starting player for that round. Players have three actions and can use those to move, destroy or subjugate, steal from each other or the thief, or gain more cards for further mayhem. After everyone’s completed their actions the turn ends with your dragon letting loose a mighty or not too mighty roar (determined by a die roll) and tribute from the subjugated villages and cities is given out. Turns continue like this until a player wins by being the first to reach 50 gold.
These clean rules and mechanics make for a fun and very accessible game. A number of die rolls does mean that luck plays a rather heavy role, but players can pillage and fight their way back to a more even playing field. Plus win or lose, you are still a dragon atop of a mound of gold and that’s badass. 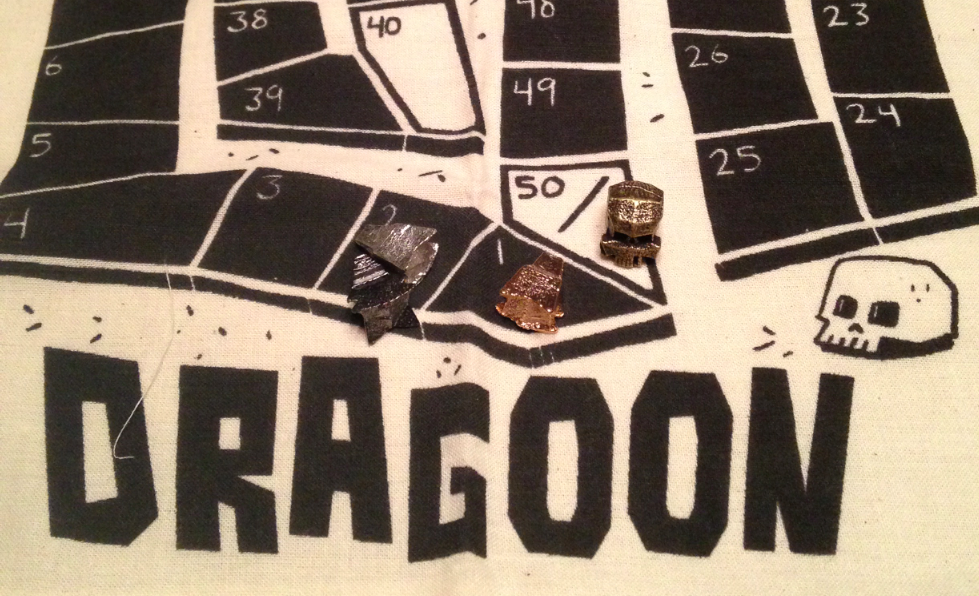 The only real drawback of Dragoon comes from one of the really cool things about it too – the game’s components. The game box proudly proclaims that Dragoon comes with over 50 metal pieces, some of those metal pieces being real gold! Thematically, that’s totally awesome. You’re dragons amassing treasure – having your pieces actually be treasure is great! Except… treasure comes at a price and this “Special Edition” retails at $75 (and that’s on sale). It’s a steep cost that will make many gamers think twice. Would metal painted plastic pieces be as cool? No way! Would them knocking $30 or more off of the price make them seem a little cooler? Eh… maybe so. (Lay Waste Games) by David C. Obenour