BATMAN & ADVENTURE TIME FLUXX (Looney Labs)
By David C. Obenour
Any game that you can explain in a sentence and still be entertained by is pretty great.
In Fluxx the rules are draw a card, then play a card.
Just say that, let it hang there, and enjoy the befuddled look on your friend’s face.
“…but you spent like a half hour explaining the last game to me?”
That was the last game, pal and we all need a bit of a break from the high-stakes world of medieval farming and battling back ancient unspeakable horrors.
As Fluxx goes on, played cards introduce new rules, draw and play amounts, hand limits, goals for winning the game and a bunch of other actions to shake things up. It’s fun, it’s silly and as long as no one pulls any funny business, you’re pretty sure you’ve set up a plan to win in the next three turns. Spoiler alert: there will be funny business.
Taking this concept, Looney Labs has released a number of different Fluxx decks designed to excite nerds of all persuasions. 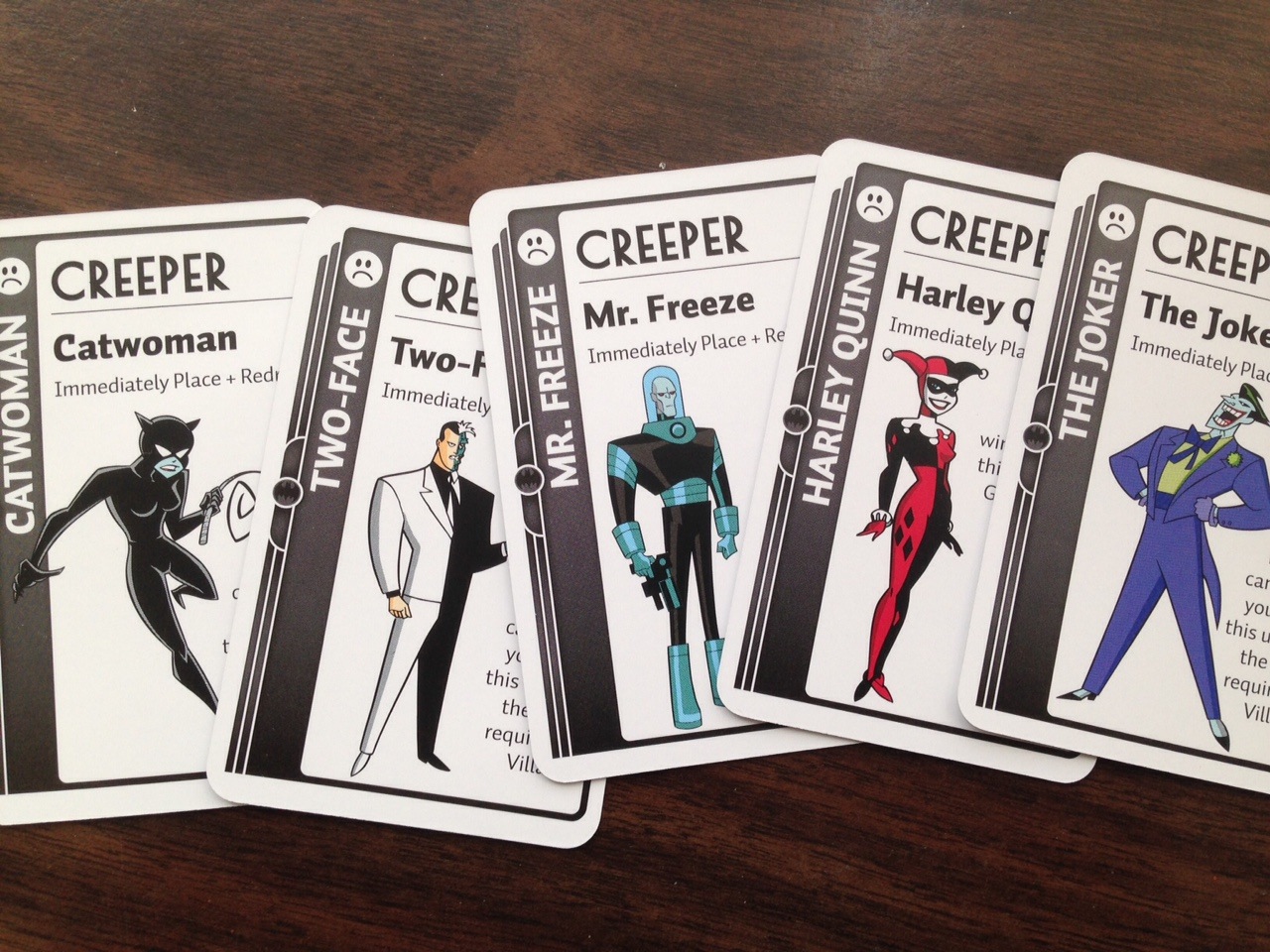 Batman Fluxx is the latest and probably greatest too. While other licensed product decks have been fun primarily due to the art and warm feelings of recognition with that art, the game integration for the Batman cartoon was really well thought out. The deck is full of villains (which any Batman nerd will tell you is the best part) and there are plenty of fun mechanics like the Bat Signal card you can exchange for Batman, or the Arkham Asylum card where villains are discarded underneath and if it gets cancelled, dealt back out around the table, or the Bruce Wayne card which must be discarded if Batman is ever played (plus, try reading “The Joker Got Away” goal card without humming another verse or two of “Jingle Bells”). Admittedly, comic book inspired art might have looked better, but that won’t stop you from having a fun time. 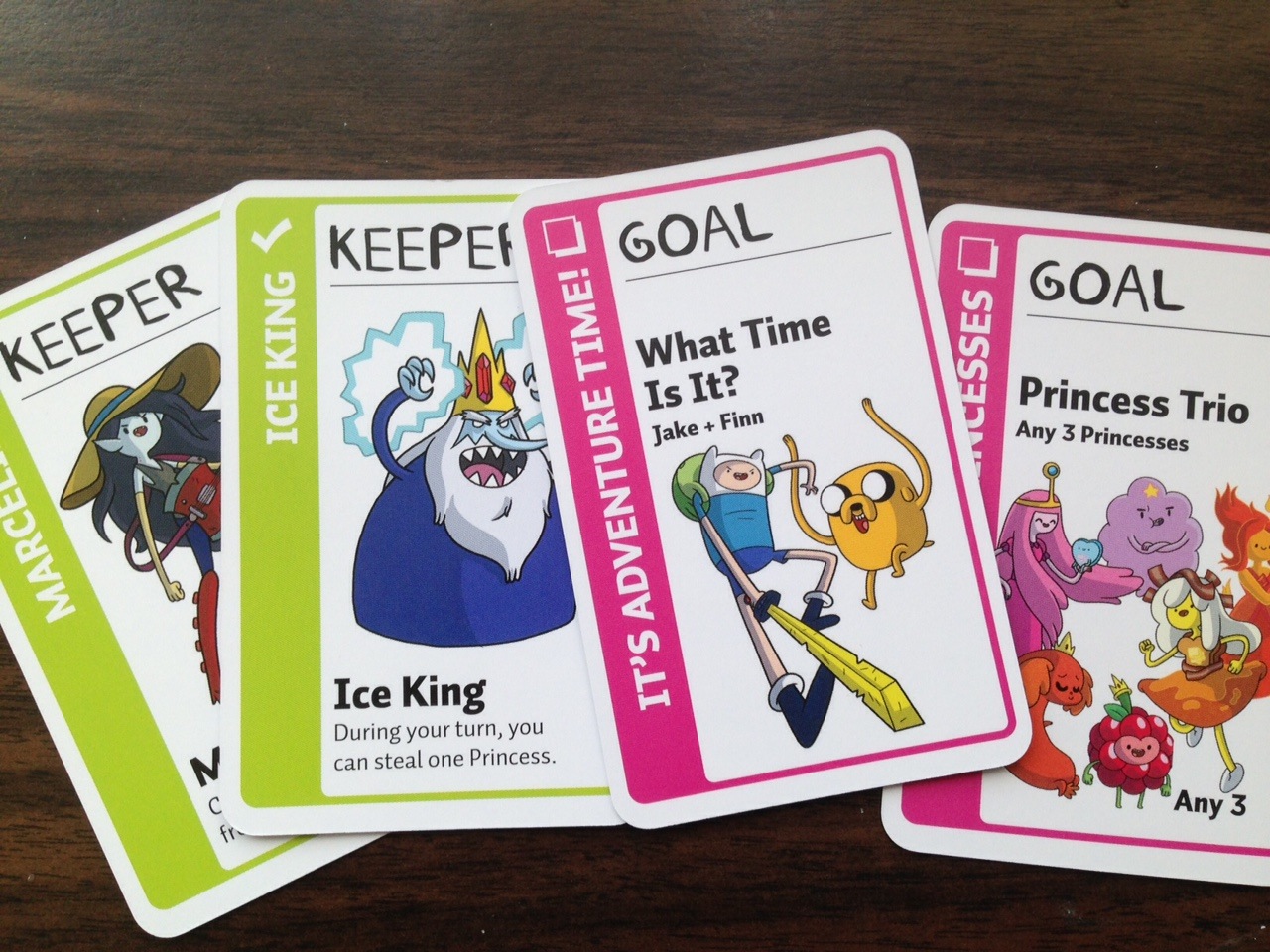 Next up is Adventure Time Fluxx that, while a fun game, does suffer from what I’d mentioned previously. It’s fun playing with Jake, Finn and Fiona, but most of the cards fit pretty well within the standard Fluxx format. One action card that’s a favorite though is “The Arena” which has all players submit a keeper or creeper for combat and then have a debate about who would win in battle. If you like Adventure Time, you’ll like Adventure Time Fluxx. It’s pretty much that simple. 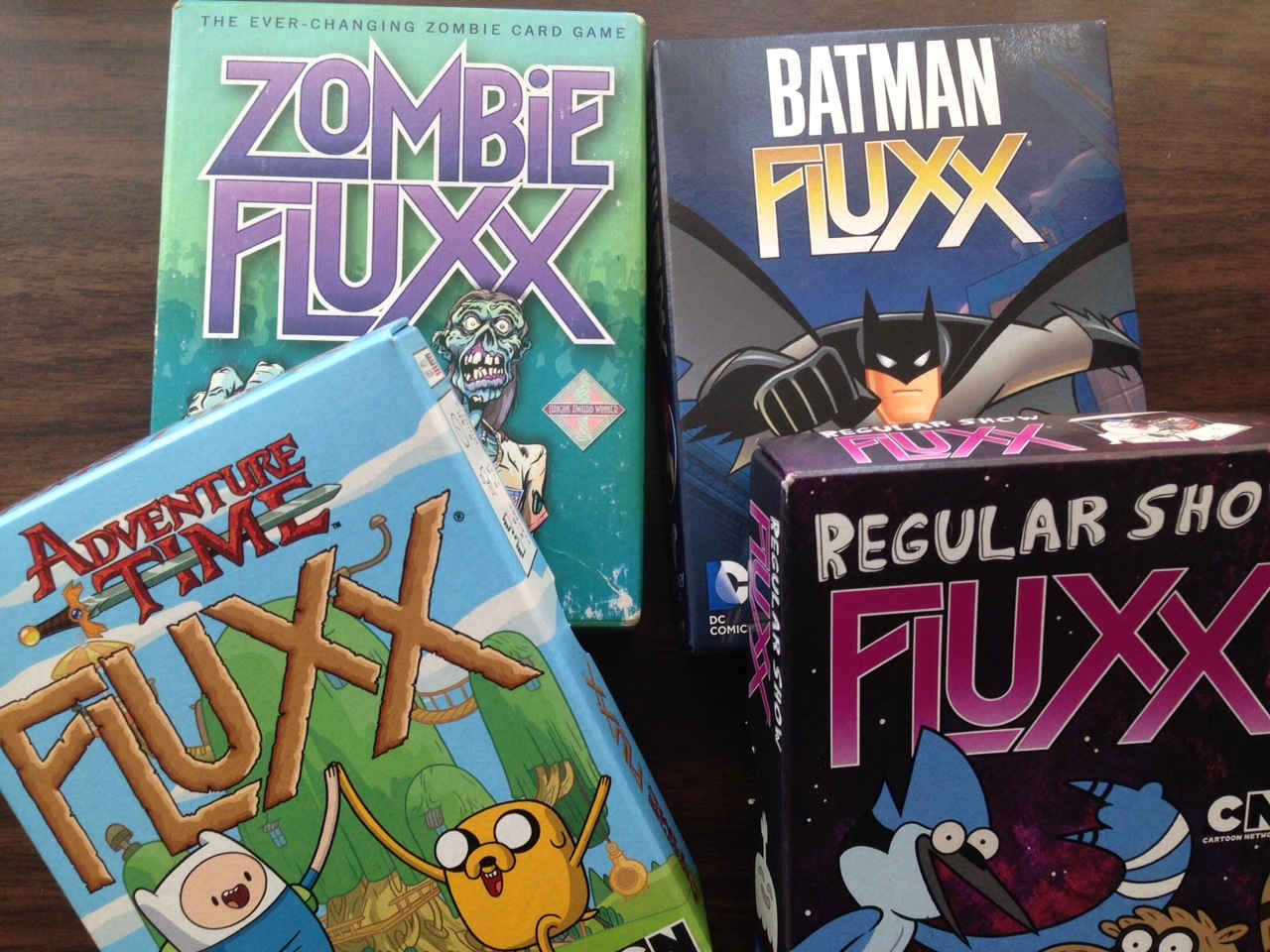 Finally, with other licensed decks like Monty Python, Regular Show and Cartoon Network, along with nerd favorite themed decks like Cthulhu, Pirates and Zombies, it’s tempting to mix decks together to make your own crossover episode game. Finn and Jake mixing it up with Mordecai and Rigby against the undead? You know that sounds like a good time!
There aren’t exact rules for mixing decks though and doing so can present a few problems. First off, goal cards for winning the game are generally related to the deck from which they came in so finding a specific card requires more deck-digging. Second, sometimes rule cards from different decks may clash with each other. That said, as long as you don’t have a rules lawyer around the table (and really, it’s a fun 5-15 minute game) it’s nothing some good-hearted, on-the-spot playtesting can’t handle. (Looney Labs) by David C. Obenour