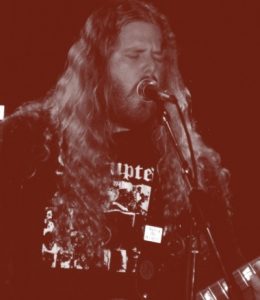 While Ghettoblaster could wax poetic all day about Cincinnati doom titans Beneath Oblivion, we like the way the band’s Scotty Simpson explains their efforts…
“ We’ve always taken a lot more influence from literature, depression, and self-observation than from music made by other people. The method being that we let things build up and then purge them when the time is right.

The band is coming into its 10th year. It started in a basement, was heavily involved in mixtape/demo trading with other bands/zines in the underground, mostly international; sending out packages to Brazil, Japan, Finland, Israel, Australia, Russia, the further away, the better.

There was no doom scene in Cincinnati at the time, maybe 7 or 8 people who were into it, yet there was a booming scene of lack-luster thrash and death metal bands. The only good one being, Estuary.

Not having anything in common at all with the other extreme metal bands, we identified a lot more with the punk, hardcore, DIY, noise, and experimental bands. Stoner rock was getting big again, but we didn’t have much to do with that either. We decided it was better to bum everyone out than to get with the groove, but it was always an interesting reaction when we would get invited to play one of those shows.

In 2007, a small indie label called 43rd Parallel put out our split with Sin of Angels on vinyl, and that’s when the folks at Mylene Sheath got ahold of our music and decided we would make a great addition to their then predominantly post-rock/instrumental band roster. We’d had other offers from more doom and metal oriented labels, but none of them offered nearly as much artistic freedom or room to grow. They ended up putting out our next three releases, and we’ve never had to waver on any of our ethics.”
Beneath Oblivion (and The Southgate House Revival recently offered Ghettoblaster’s readership the opportunity to see the band in person, performing on December 21 in Newport, Kentucky.  For details about winning tickets, go here: http://www.facebook.com/#!/pages/Ghettoblaster-Magazine/133069270058706
In the meantime, check out Simpson’s list of the best releases of 2012:
1. Pallbearer – Sorrow and Extinction (Profound Lore)
I’m always skeptical of new bands, but these guys do it better than a lot of old-school traditional doom bands. I listened to it every day until my car got stolen with the CD in it. The band’s then drummer, Chuck Schaaf, heard about my misfortune and sent me a new CD with a shirt, because he’s a hell of a guy, but then some girl took it. I have it on vinyl now, so I’m good.

2. Katatonia – Dead End Kings (Peaceville)
What I like most about this band besides their hooks is their willingness to unapologetically abandon one style and progress into whichever direction they feel fit regardless of what critics, elitists, and peers say. The goal is to make music for yourself, and if there is sincerity, others will understand. To me that is what a true artist does.

3. My Dying Bride – A Map of Our Failures (Peaceville)
An excellent album, by an excellent band I’ve been into since my teenage years. The production and amp sound on this album is tits, the drumming is the best, and though a few of the lyrics on this one come off as kind of silly, Aaron’s voice has never been better.

4. Godspeed! You Black Emperor – Allelujah! Don’t Bend! Ascend! (Constellation)
Probably one of the most amazing live show experiences one can have. I could write a paragraph, but this isn’t a review, so I won’t. This album has so much feeling in it, and was well worth the wait.

5. Evoken – Atra Mors (Profound Lore)
This was the first funeral doom band i ever heard, and I can’t believe how fucking good they’ve gotten. There’s nothing hipster about it, just doom and death cutting right through you the way they always have, but still ahead of the curve.

6. Agalloch – Faustian Echos EP (Profound Lore)
This is a wonderful release by one of my longtime favorites. It’s a lot more black metal than I’d hoped at first, and not “the Mantle” or “Ashes Against the Grain,” but it really made me start listening to a lot of brutal music again. It’s by far the best they’ve ever sounded on a recording, and that’s what you get when you have big Billy Anderson turning the knobs!

7. Samothrace – Reverence to Stone (20 Buck Spin)
Some old friends we used to be in contact with who moved from Kansas to Seattle. I hadn’t heard much for a few years, but then they came out with this! A substantial progression that stays true to the sound and feel that Samothrace puts out there.

8. Panoptocon – Kentucky (Pagan Flames)
The best black metal release I’ve heard in years with lots of crust and bluegrass influences. A hell of a nice guy, a nature lover, and a humanitarian donating proceeds to fight mountaintop removal.

9. Pinkish Black – Pinkish Black (Century Media)
Some very interesting and innovative experimental sludgy ethereal music from Texas. That’s a lot of adjectives, but give them a listen, you’ll see what I mean.

10. Swans – The Seer (Young God)
It’s a shame all of the douche bags have finally caught onto how good this band is, when I would have been called a “fag” for saying I like this band a few years ago. Decades later, they finally get the praise they deserve.

Tags: Beneath Oblivion, The Mylene Sheath