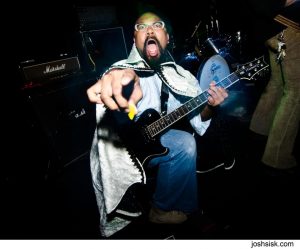 Baltimore musician and engineer Joseph Mitra has been a crucial player in east coast hardcore and indie music for decades now.  Not only has he been behind the boards on records by Frodus, Coke Bust, Regents, Trapped Under Ice, Solar Powered Sun Destroyer and more, he’s collaborated with alt-hip hopper Cex (under his MC pseudonym Tony Hillfiger), fronted his own outfits (including the Chase), and toured as an instrumentalist for a variety of bands including Sacred Love and most recently Diamond Youth.
Also, in recent years, Mitra and friends started a free, after-school program, The Rappers Delight Club, where Mitra and others taught kids creative writing and music.  The effort received considerable press (Pitchfork, NPR, Washington Post, Stereogum, SPIN, etc/) and led to an appearance from the kids on “Universal Speech” on the album Proof Of Youth by The Go! Team.
He was kind enough to provide Ghettoblaster with a list of his top 10 favorite releases of 2012, and a heads up on some of what he’s got cooking.  Here they are:
Royal Headache – s/t
Even though it officially came out last year, these soulful, no, like, *legit* soulful Aussies’ self-titled smooth-but-lo-fi rock n’ roll LP finally gets a proper US release and I’m happy to pay a reasonable price for it. Quick and dirty, it’s great for a windows-down car ride.
Kendrick Lamar – Good Kid, M.A.A.D City
Kanye Westside: Vibes for days, this LP is like ‘ye, but with style, grace, and emotion.
Hop Along – Get Disowned
It’s not the flourishes and musical skill that makes this art-pop band so effectively good, it’s the dynamic pulling-back that allows the listener to savor the sweetness that comes with a familiar and euphoric rasp to Frances Quinlin’s vocal delivery.
Actress – R.I.P.
With the production techniques used on R.I.P., this LP exists in stereo, but is a three-dimensional psycho-acoustic electronic experience.
Converge – All We Love We Leave Behind
Sounding like they took cues from Pianos Become The Teeth, Converge serve up a healthy dose of aggressive and dynamic hardcore that is both heavy, and a damn party.
Swans – The Seer
Literally, a percussive epic.
The Sidekicks – Awkward Breeds
Man, can these dudes belt out some perfect power-pop.
Quakers – s/t
Like, punk rock, this hip hop LP is proof that simple can be effective.
Killer Mike – R.A.P. Music
Killer production, killer delivery, killer LP.
Sick Weapons – Birthday Gift
A breath of fresh annoying-punk air that needles you into a rage with a billy club, like when you heckle a comedian that’s really good at heckling you back, but with the ability to laugh along with the entire audience.
Hopefully out by the end of this year and should definitely be on my top ten but it’s not because it’s out yet:
The Ambulars – Dreamers Asleep At The Wheel
Like a shoegazey Superchunk, or a Get Up Kids with vunerability, this power/punk/pop album is damn near perfect, not to mention that I had the pleasure of recording it, and, the band members are some of the best people I know. #suckingup #shamelesspromotion
Honorable mention:
http://crimes666.bandcamp.com/
Listen to The Ambulars Troubled Sleep, and In Between, both bands that I love and have recorded.
http://theambulars.bandcamp.com/
http://troubledsleepny.bandcamp.com/
http://inbetween3.bandcamp.com/
Come see me play bass with Diamond Youth on Braid’s Midwest holiday tours.
http://www.dmndyouth.com/tour
I just finished mixing Maxmillion Dunbar – House Of Woo on Rvng Intl., out in 2013.
http://www.igetrvng.com/
I’m also working on Long Island Hardcore band, King Nine for Baltimore’s Mass Movement Records, and hardcore punk band Angel Dust (Baltimore) for Photobooth Records, both with 2013 release dates.