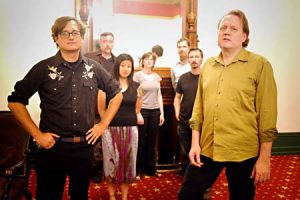 Long-running Austin, Texas seven-piece band My Education released their sixth album, A Drink For All My Friends, on November 27 in North America on Headbump Records/Haute Magie and in Europe on Golden Antenna. A Drink For All My Friends was the band’s most streamlined and aggressive effort yet, while remaining an entrancing cinematic journey throughout, exploring everything from the final communiques from doomed airline pilots to a frenetic and violent outburst from a laboratory golem.
With such a fabulous record under their belts in 2012, Ghettoblaster had to know what other band’s records impressed My Education’s Brian Purington this year.  This was his top 10:
A Place to Bury Strangers: Worship
Beach Boys: Smiley Smile Remaster
Black Moth Super Rainbow: Cobra Juicy
The Gary: Remains
Maserati: Maserati VII
Majeure: Solar Maximum
Mogwai: A Wrenched Virile Lore
Plutonium Farmers: Helloha and Index Zero
Thousand Foot Whale Claw: Dope Moons
Weird Weeds: s/t