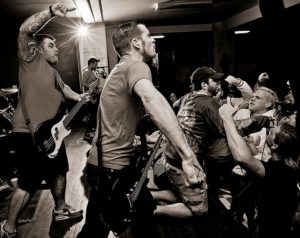 Test of Time started very organically in the spring of 2012 by a group friends with a mutual admiration for the straight edge and a desire to form a band that was different than what was currently dominating the Boston scene. Chemistry was immediate as songs flowed out at an alarming rate.  The band, featuring noted Boston-area photographer Todd Pollock (vocals) alongside Charles Chaussinand (guitar ex No Harm Done, Offsides, Make or Break), James Christopher (guitar/vocals  ex The Effort), DJ Butler (bass) and Jeff Novak (drums) quickly self-recorded and self-produced their debut 10 song EP Inclusion.  After a well-received release and playing numerous shows with bands they never thought in their wildest dreams they’d share the stage with, Test of Time continued to write material at a steady pace.
The band quickly caught the attention of Bridge Nine label owner Chris Wrenn and the partnership with Test of Time was almost immediate. The band released a new 7-inch, as well as a new full-length LP, in 2013 on B9.
Ghettoblaster recently asked guitarist Chaussinand what his favorite records of the year happened to be, and this is what he told us.
1. AFI – Burials
2. War Generation – Start Somewhere Never Surrender
3. Bad Religion – True North
4. Destructive New Age – s/t
5. Mindset – Leave No Doubt
(More information on Test of Time is avaliable at their blog and bandcamp.)