Iron Chic’s long-awaited sophomore full-length, The Constant One, ups the band’s ante, boasting nearly 40 minutes of their heartfelt, signature melodic punk with big buildups, warm harmonies, and gripping climaxes. The band tackles somewhat similar subject matter to 2010?s Not Like This with deeply embedded metaphors hinting at themes of communication, perseverance, and self-worth, This makes their Bridge Nine Records debut no mere sequel, but rather its own set of cleverly cloaked ideas soundtracked by a bed of driving riffs and life-affirming melodies.
The band launched an extensive tour in February in support of the record, taking along Dayton’s own Josh Goldman, of Rad Company, The Raging Nathans, and Rad Girlfriend Records, as a substitute for their regular guitarist whose obligations forced him to sit the jaunt out.
Ghettoblaster caught up with vocalist Jason Lubrano prior to their Gem City stop to discuss, among other things, the actual Iron Sheik, Goldman’s participation, and the difficulties of explaining the creative process to outsiders.
Josh Goldman, who is from Dayton, has joined you on this tour.  How did you meet him and what prompted the invite to join you guys?
I think a bunch of us know Josh through different channels. I met him doing artwork. I believe he was in touch with my partner at the time, so I met him that way. My partner met him through his record label, trading records. We’d also see him around a lot when our bands crossed paths. I think he put it out there that he’d play guitar if we ever needed him. We knew he played with other bands on the road, had a flexible schedule, and that combination of factors made sense at the time. We know he’d be excited to do it and wouldn’t mind being out long stretches at a time.  So he seemed like the right guy to ask. 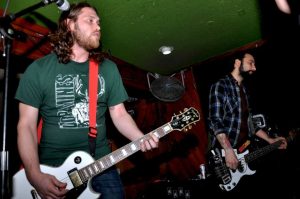