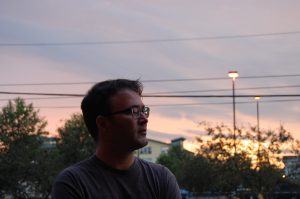 Midway in Wake originated in 2006 in a tiny studio apartment in southern South Korea where Texan Greg Reynaud moved to in order to write a new chapter on life. After the breakup of Lovetron (a band that featured early At The Drive-In guitarist Adam Amparan) and the release of an instrumental/electro/hip hop solo EP Behold the Profit (then Thieves) on Lowatt Records, Greg began hashing out rudimentary recordings with nothing but a guitar, voice, and whatever was lying around the place.
Though the aforementioned projects satisfied the desire for creative expression, Greg continued to record vocal/guitar driven music. Lacking musicians with which to collaborate with in South Korea, Greg decided to work towards releasing a full length album on his own.  We Will Remain Sedate is slated for release in late 2012 on Lowatt Records, and is Reynaud’s self-produced and arranged album.
Ghettoblaster recently caught up with Reynaud to discuss his Gyeongsan, South Korea home, rice wine, jook, teaching, and more.  Here’s what he told us…
What’s your town’s nickname?
The town, Gyeongsan, doesn’t have a nickname that I’m aware of, but my neighborhood, Sampoong-dong, is sometimes referred to as the “poong-dong”
Why do you live there?
I teach at a university here.  Gyeongsan is a suburb of Daegu, a city of about 2.5 million people.
Did you grow up there? If not, what brought you there?
I wanted to teach abroad and had a few options.  Having grown up in Texas and not knowing much of anything about Korea, I decided to move here.
What’s the weirdest thing that has ever happened to you there?
When I first arrived, I was constantly stared at by children and adults and received random “hellos” from people.  Getting pushed aside by older men and women before getting on a bus or subway is pretty commonplace.
What is your favorite local attraction (monument, park, etc)?
There are mountains and temples everywhere in Korea.  I usually take walks in the wilderness area near the university.  There are people everywhere at all times, so it’s difficult to find privacy.
What is your favorite local event or festival?
I used to get out to Buddhist, lantern, and fireworks festivals here, but not so much anymore.
What is the best time of year to be there?
Autumn is a great time to be here, especially around September/ October.  Leaves changing, pleasant weather, etc.
Who is your favorite local celebrity?
I would have to say my favorite Korean celebrity is Park Chan Wook, the movie director famous for his revenge trilogy, including Old Boy.  The singer Psy, famous for the track “Gangnam Style”, is all the rage these days.
Where is the best place to drink and what’s their specialty or happy hour?
Korea has a few specialty drinks, one cheap and awful liquor called soju.  Kind of like a sweeter vodka, but made mostly from chemicals, hence the $1 a bottle it costs.  I would rather have the fermented rice wine called makkoli.  A little like sake, but cloudy and milky.
Who has the best jukebox (and what’s in it)?
Sadly, no jukeboxes.
Do you play music there? If so, where is your favorite place to play?
Not yet.  Someday, hopefully!
Does where you live influence your music?
I would say some of my lyrics are influenced by my life here.  I suppose the fact that I recorded everything myself has to do with my surroundings.
What is your favorite place to see live music and what was your favorite show there?
I went to see No Age a couple of months ago in a larger city called Busan.  A cheesy, heavy metal/rockabilly/punk band from Korea opened up and put on an awesome show!!!
What is your favorite diner or restaurant and what is their best dish?
I often go out to a place that serves Korean porridge called Jook.  You can have it with seafood, meat, or vegetables.  Pretty tasty stuff.
What is your favorite record store and what was your best find there?
Sadly, no record stores in my area.
What is your favorite local publication (alternative weekly, zine, website or blog)?
There are a few publications for expats that help people adjust to life here.  Mostly they contain information about events and venues around the main city, Daegu.  Daegu Compass and  Bracket are a few.
What is your favorite local outing?
Hmm.  I usually cook my own food, make my own coffee, and brew my own beer, so I would have to say my home.  There’s a cool western-style bar called Traveler’s that serves veggie burgers and pints of pale ale, which are incredibly hard to come by in Korea.
If you could live anywhere else, where would that be?
Since I am in the field of education, I’m intrigued by Finland’s educational system.  Students in Korea study hard for tests and to further their careers.  Finnish students don’t study as hard, but manage to do as well on tests as Koreans.  I’d like to see why that is.
(Check out some music by Midway in Wake at one of these locations:
http://store.lowatt.com/album/we-will-remain-sedate
http://midwayinwake.com/
http://www.lowatt.com/
https://www.facebook.com/midwayinwake)