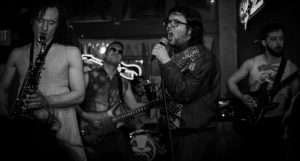 By Tommy Johnson
Over the last five years, the members of Abertooth Lincoln have continued to grow with one major priority; to strive to be a group that pushes their music to new levels.
Their latest release, Osteoferocious, highlights the group’s evolution that puts emphasis on a furious mixture of punk, metal, prog rock and jazz. Distributing online in late 2014, Osteoferocious is beginning to pick up momentum with listeners and show attendees. When asked how they felt about the album’s reception so far, the members of the band gave positive feedback with realistic expectations.
“We were smart about knowing how that works,” James Lampe says. “You put out a record that you are really proud of and like everything though, there is so much content out in the world and the internet to see; it doesn’t make the fucking immediate splash right when you come out of the door with it.”
“We have had great success online,” bassist Andrew Humphrey mentions. “We’ve had a shit load of plays, people are sharing. It’s been great.”
Recording with Nashville based producer/engineer Eric Westmaas (which the band affectionately refer to as Uncle Milk with no explanation given), Abertooth Lincoln spent the better part of a year working on Osteoferocious by taking numerous weekend trips down south. The days were long for all that were involved; recording sessions often reached up to twelve plus hours a day.
However, everyone knew something special was occurring. The patience and dedication started to show its teeth. When the vocals were recorded down in the Aberplex basement, Westmass continued to push vocalist Jacob Gandert harder and harder to get the right amount of roar.
“Every ten second part I did probably thirty times,” Gandert says.
“He (Westmass) would just be, ‘I think you got another one in you. You got another one in you…’” Lampe included.
The meticulous attention to detail, like making sure the vocals were precise, is just part of the lure of Osteoferocious. Lyrically, the band focuses on calling to attention on a variety of topics that affect us not only as a nation, but globally. “Medicaretastrophe” shines a bright spotlight onto the unstable nature that is our national social insurance program, with Gandert snarling at the beginning “Goddamn I’m sick again/I’ll call the ambulance so I can rack up massive debt.” “GMO Shit!” goes after genetic engineering techniques while “Dreamy Kids” centers on trying to not become stagnant.
With the serious temperament surrounding the entirety of Osteoferocious, Abertooth Lincoln swear that they are no way trying to beat their views into everyone, but rather to further conversation; provoke the fans and listeners of their music to dive more into the topics that are being presented.
As far as their live performances are concerned, Abertooth Lincoln keeps things light-hearted, with the goal in mind to make sure everyone has a good time. Take for instance that each member of the band have bestowed individual stage names and will dress up in a variety of different ensembles. At a recent show in Dayton that was advocating for marijuana to be made legal in Ohio, everyone in Abertooth Lincoln was outfitted from head to toe in police officer gear.
“We looked like the fucking Beastie Boys,” Lampe said humorously.
In the midst of all that Abertooth Lincoln have going on within their camp and the increased exposure coming along for the ride, some new material is putting together in hopes to record with Westmass in the foreseeable future. Production is also underway on a comic book that will feature of the band’s fictional character Abertooth Lincoln’s and his war against The American Beef Battalion (a meat and labor replacement fleet) and his battle with the dreaded Osteoferocious.
The music does come first, though. Having the opportunity to play more shows outside shows than they have previously, the band is looking towards the summer time of going on a Midwest tour.
“People are reaching out to us-that’s starting to happen a lot more now,” Lampe says.
(Visit the band here: https://www.facebook.com/abertoothlincoln.)