Fresh off the release of their new album Into The Night World, Swedish alternative metal band Machinae Supremacy are off their very first tour of the United States
Machinae Supremacy is recognized internationally for their exciting blend of alternative and power metal accented by 8-bit chiptunes. The band has quickly risen up the ranks over the course of the last decade, amassing a global fanbase. Their webography, a free music catalog on their website, has racked up over 10 million downloads and counting, to date.
Despite busy touring cycles, the band have kept performing songs from Final Fantasy soundtrack catalog alongside the Royal Philharmonic in Stockholm, they appeared in an official Ice Hockey World Championship TV commercial, and they produced the original soundtrack to the video game Giana Sisters: Twisted Dreams together with video music legend Chris Hülsbeck.
Ghettoblaster recently caught up with vocalist Robert Stjärnström to discuss all of their activities. This is what he told us.
How is your very first tour of the U.S. going so far?  What portions of the country are you most looking forward to visiting?
We are loving it, it’s exciting and also challenging because we are visiting places we haven’t before and using different equipment because we’re traveling fairly light. NY has been incredible and MAGFest in D.C. before it, of course. Tonight we have Chicago, which is such an incredible city and we’re really looking forward to it. We are ending with Texas and I think we’re all looking forward to that the most. 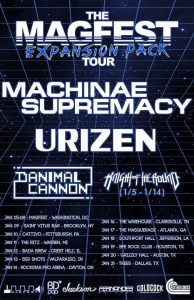 What were you hoping to accomplish with Into The Night World?
We never really have a strategy like that. The music is our art and we work it and follow the creativity where it leads. Now that the album is out though, we hope that people find it memorable and meaningful, not just entertaining.

Are there messages you were hoping to convey or a story you were hoping to tell with the record?
Yes, there is a story here, but it is also true as with most of our music, that any given song has more than one message. We try to be clever and find ways to say something relevant even if the core of a song belongs in a fictional context.
Your sound is a bit unique in that you accent it with 8-bit chiptunes.  Where did this concept come from?
It was actually what came first. I was producing music with chiptune aspects when I met Jonne, our co-founding guitarist. He brought a guitar and an amp to my place and started riffing on what I had made, and we just knew right there and then that we had something truly unique and awesome.
What are your proudest moments on the record?
I believe “Remember Me” as a whole, being our first ever ballad, is definitely up there. Beyond that, I love how the vocals on songs like “Twe27ySeven” and the title track are more theatrical (for lack of a better term) than before. There are some really great songs on this album and I’m proud that we still dare to experiment and transcend genres, even though this might be frustrating to those who wish we were more traditionally metal.
Not long ago you performed the Final Fantasy soundtrack catalog with the Royal Philharmonic in Stockholm.  What was that experience like?
Indescribable. There is something about the way an orchestra sounds when you’re in the hall with them, not to mention on stage with them, that can’t be captured in a recording. It brought actual tears to my eyes.
You’ve also produced the soundtrack to a video game. How did that endeavor come about?
Several actually. We dream about making video games but unfortunately our skill set and range of tools have been limited to music and sound production, so that becomes the aspect where we can contribute. And we’ve been lucky to get the chance to do that. One of the reasons we got to make music for Giana Sisters: Twisted Dreams, was because we made a cover song of the main theme from the original game a long time ago. That went viral and when the new game was to be made, the makers and the original composer wanted us on board. It’s quite an experience to grow up with heroes, and then find yourself working with them.
What is your next loft goal for the band?
Touring the USA is a big milestone for us, but next we’ll go back to Europe and make new music and keep touring. One of our biggest projects in the past was making the music for the iconic indie video game Jets n Guns, and this year we’ll be making the music for the sequel.
(Catch Machinae Supremacy live here:
January 13, 2017: Big Shots – Valparaiso, IN* (with Psychostick)
January 14, 2017: Rockstar Pro Arena – Dayton, OH*
January 16, 2017: The Warehouse – Clarksville, TN
January 17, 2017: The Masquerade – Atlanta, GA
January 18, 2017: Southport Hall – Jefferson, LA
January 19, 2017: BFE Rock Club – Houston, TX (with Secret of Boris)
January 20, 2017: Grizzly Hall – Austin, TX (with Secret of Boris)
January 21, 2017: Trees – Dallas, TX (with Secret of Boris)
*with Knight of the Round
Visit them online here:
www.machinaesupremacy.com
www.facebook.com/machinaesupremacy
www.youtube.com/user/MachinaeSupremacy
Listen on Spotify)