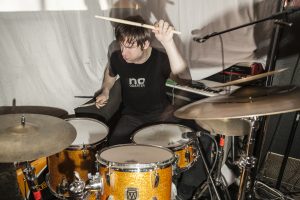 While drumming out rhythms may sound like a simple practice, when performed by John Colpitts of Man Forever (and Kid Millions and Oneida), it initiates a journey that results in sophisticated compositions that delight even the most astute fans of experimental music. For instance, Colpitts most recently released a collaborative album with So Percussion, which combines drum sets, bongos, cymbals, snares, and even a little singing, to deliver an incendiary mixture of technique and heart.
This spring, he joins percussion ensemble TIGUE to perform propulsive, polyrhythmic compositions for the masses. Ghettoblaster recently spoke with Colpitts about the project, his collaborative spirit, and writing his complex compositions.
When did the concept for Man Forever emerge and how did it become clear to you that it was something you wanted to pursue?
I started the band in 2010 and pretty soon afterwards it felt like a good avenue to pursue. Oneida wasn’t playing as much and I wanted to spend more time working on music. It was a natural progression.
In what way does music that includes only percussion challenge your artistic sensibilities?
I might ask you the same question. I’m a drummer so it’s not challenging to my sensibilities, especially since I sit behind the drums all day. Perhaps it’s challenging physically and creatively because I’ve set myself up to make music that isn’t particularly commercial.
Finding and fostering collaboration with other percussion artists seems to be critical to the Man Forever approach. How do you discover and engage in these relationships?
It really depends. I think it’s pretty much the same way you might foster other creative relationships. Over the course of your career you hear about and run into people who are on similar paths creatively. You might reach out to them or meet them organically. With So Percussion I was asked to collaborate with them through a presenter, Ronen Givony from Wordless Music. I met TIGUE at a So Percussion benefit.
I knew about So Percussion and thought it would be a great pairing. I’m really thankful someone else thought it would be strong as well.
How long have you been aware of So Percussion and how did your relationship with them evolve?
I think I heard about So Percussion through the collaboration they did with Dan Deacon as part of Ecstatic Music Festival. My relationship with them started actually when we both agreed to be part of the PUNK: Chaos to Couture exhibit at the Metropolitan Museum of Art. It started initially with the understanding that we’d present a concert, then I asked if they’d be interested in including a recording session into the collaboration. They agreed. The session went well so Thrill Jockey agreed to release the album and we’re doing some shows together in July.
So Percussion actually spent some time in Dayton not so long ago as part of a student education project?  Have you compared notes with them on your time in Dayton and your collaborators here?
That’s news to me. I’ll have to ask them about it.
Who composed Ryonen and what is the concept behind those two pieces?
I composed them. For “Ryonen” I chose to base the pieces on a pulse. “On The Clear Realization”, the rhythms and stickings are challenging and require practice. I wanted it to be something powerful and immediate for the listener because I felt as if I had explored dislocation and confusion for a number of years and through a number of pieces. That confusion was an exciting and fruitful source of material, but I felt like it was time for me to just play the drums for a bit.
In a way it felt like I was avoiding that with Man Forever. “Ryonen” was written more to cohere to the musicians I would be working with in So Percussion and I wanted to try to write something that was extremely challenging on a technical level while still remaining in the spirit of Man Forever…that endless flow of energy I’ve always wanted to tap into. Plus, I wanted the guys to sing. I love singing but I’m afraid of singing. I’m not great at it. I can’t hold a tune so well while I play the drums. It’s hard and I feel insecure when I do it. But I love to sing and I thought let’s try to bring that into the mix. I also felt like the guys in So hadn’t been asked to sing much. They were game.
Last time you were in Dayton I believe you invited one of the folks from Hyrrokkin to perform with you. How did you encounter them and what was that performance like?
The entire band of Hyrrokkin actually played in Man Forever. I can’t remember who recommended I reach out to them, but they are really amazing musicians and people. I think it was a really strong performance.
When did you begin collaborating with the TIGUE ensemble and will they be with you during your stops in Dayton and Columbus?
I started working with them about eight months ago and they will be with me for both of the shows. TIGUE are the one of the premier young percussion-based groups in Brooklyn right now. Aside from So Percussion, they are the best possible collaborators.
The shows so far with these guys have been absolutely incredible; just amazing displays of percussion technique. As a unit, we are really locked in and all the members of TIGUE are from Ohio, so they are bringing their “A game” to these shows. It’s really not something to miss. You have to see these guys play.
Do you have plans for future endeavors following the tour?
Definitely have plans, nothing solid right now. I could use some recommendations for great spots to eat in the Dayton and Columbus area though.

New Music | Friday Roll Out: This week we take a d

Check out the video for @momma.band 's new single