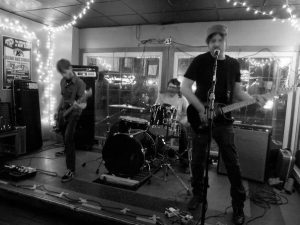 Ohio’s Ultrasphinx, which features vocalist/guitarist Joe Dennis, previously of The Party of Helicopters and The Man I Fell In Love With, play crescendo-building, dazzling rock music that is a combination of sounds from metal, to shoegazer, to good ole indie rock.  The band recently announced that they’d be dropping a self-titled LP, which is due out Spring 2014.
The album’s twelve tracks were recorded over a span of several months following their 2013 Midwest/East Coast tour by the Black Keys/Cage The Elephant FOH engineer Jason M. Tarulli and engineer Ben Vehorn (Strand of Oaks, Royal Bangs, Drummer, the Black Swans).
Ghettoblaster recently caught up with Ultrasphinx’s Aaron Rogers to chat about being a band in Akron, Ohio and the new record.  This is what he told us.
Kent/Akron has always been an unsung hotspot for indie talent. Do you believe it got its due or did the combination of The Black Keys coming up and other Ohio cities blowing up (Columbus with Shitgaze, Dayton with GBV/Breeders, etc.) overshadow other Akron acts to some degree?
Well, you can’t get much bigger than the Black Keys… I think most of the attention bestowed upon Kent and Akron is still looking towards the past, to the ’90s Mantis scene, and all the Donut Friends bands. I love all that stuff, but there’s a decade-long gap between that stuff and the Black Keys that gets ignored.
Going to shows at the Robin Hood in Kent and sneaking into the Lime Spider in Akron as a teenager to see bands like Interfuse, Hell’s Information, Concordia Discors, This Moment in Black History, Don Austin, Sofa King Killer, and tons more – too many to list – blew my mind, but those bands didn’t get a lot of attention. A lot of bands from back then are still active, and better than ever, and there are a lot of good new bands – Relaxer, Stems, the Oxnards, Mockingbird, but there’s not a lot of coverage.
How did you guys get together?
Ian (our drummer) called me one day and said, “Hey, Joe Dennis wants to start a band with us. It’s called Ultrasphinx. Practice is Tuesday.”
With Joe Dennis’ previous runs in heralded bands, did it make it intimidating to work with him, or was he difficult to convince to get in knee deep on another band?
Nope.
Operating between the metal and shoegaze genres has always been a forte for the members of Ultrasphinx. Where does that proclivity come from?
We’ve never really discussed our influences or anything like that. We had a vague concept of the band early on as kind of a math/prog-rock Neil Young & Crazy Horse, being sloppy and tight at the same time, but we never really gave it too much thought. I guess the metal/shoegaze thing just comes from the fact that we have a few heavy riffs, a couple delay pedals, and multitracked vocals with lots of reverb on the album.
It seems like Akron has all the right offerings for a not-yet-huge band; good recording, good peers, decent venues, cheap rent. Is that what has kept you guys there?
Yeah, plus we’re all pretty settled in here. Work, school, other bands, stuff like that. I’m actually from a rural area about 20 or 30 miles outside of Akron, so growing up I always thought Akron was the “big city.” I used to dream about moving to Akron to escape the cornfield I grew up in.
When did you begin writing for the LP and what made Tarulli the natural choice for that?

We started writing the LP in March 2013. Joe came to our first practice with an acoustic guitar that had only 5 strings on it, and “Left Objects” and “Stoned Hearts” pretty much complete, and maybe 15 or 20 other partial songs/riffs. Possibly more than that. For those first two songs, we worked as a band to write the middle sections for each and finalize the arrangements. For almost everything else, Joe showed us the riffs at band practice, and if it clicked right away, we worked it into a song, and if not, we moved on to the next one until we found one that worked immediately.
As far as making the album is concerned, Jason was the obvious choice for us because first of all, we’ve all known him for years. He’s been in a ton of great bands. He’s recorded a ton of great bands. He and Joe went to Kent State at the same time. Plus, I’ve assisted him on a bunch of sessions at STUDIO TIME, so I know that he works quickly and meticulously in the studio.
When we left for tour, we hadn’t talked about doing a record at all. After three or four shows we realized we were probably the tightest we’d ever been and decided that we needed to get into the studio ASAP. So we called Jason on the way to a show in Philadelphia and booked the next available session. Not including set up time, we recorded 14 songs in about 2.5 hours, all first or second takes, and kept 12 of them.
You are self-releasing the LP. Was that a choice that just seemed natural? What are the benefits of that for you guys?
Yeah, because we want to get it out as quickly as possible. It’s taking forever, but that’s our own fault. The benefit of doing it ourselves is that we can make the record exactly how we want it to be, and we keep all the profits from whatever we sell, which goes right back into the band fund to pay for future recordings, artwork, t-shirts, tours, etc. We’re releasing the album on CD first, because that’s what we can afford right now, then we’ll do a vinyl release later, once we have the money for it. Or, if somebody out there wanted to do a second pressing of the CDs, or help us with the vinyl release, we’d be happy to work with them.
Were there any lessons learned from your 2013 tour, and how will you apply those as you support this LP?
Nothing specific comes to mind. We definitely had a ton of help with the first tour – our friend Trevor in NJ was invaluable when it came to booking the Philly and NJ shows. Jerry Dirr from Knife the Symphony bought us a motel room. Jeff Soper from the band Bad Trouble designed a tour poster for us in his free time. Just tons of friends really came through for us with booking/promotion/places to stay/etc.
We’re hoping to get back on the road this summer for about two weeks or so, and I expect it’ll be about the same – we’ll be visiting friends and playing as much as we can. The best lesson we learned was how to tour smart – we dealt primarily with other bands and people we knew we could trust to approach venues with lineups that were as complete as possible, sent out flyers as early as possible, and had a great trip.
What are the moments from the LP that you are most proud of?
That it’s finished. The album sat unmixed for a while, due to scheduling conflicts, so eventually the job of mixing the album got handed down to me, and I was totally unprepared. I mixed a few of the songs 4 or 5 times before I got it right. After a few weeks of trying and failing, Joe and I mixed the record in two days and I think we nailed it. Jason also mixed one song (“Tight Leafs”) and Ben Vehorn recorded and mixed “Left Objects” and “Ruling Planets,” which were scrapped from the original session with Jason and re-recorded later.
Do you guys use Earthquaker pedals on the album?
Yes! Full disclosure: I work at EarthQuaker Devices, and I’m a total gear nerd. I used the EQD Monarch, White Light, and Hoof on bass, along with the Tronographic Rusty Box, a ProCo Rat, MXR Carbon Copy, and EHX Micro Pog. Joe used the EQD Speaker Cranker, Dispatch Master, and Royal Drive on guitar, along with the Tronographic Boxidizer, Line 6 DL-4, Digitech Whammy, and EHX Holy Grail.
I played a Fender Jazz Bass into a Sansamp feeding a QSC power amp into a Mesa Boogie Diesel/Dietz/Thiele/TL-606/whatever you wanna call it cabinet with a 15″ EVM-15L speaker, and the guitar setups we used were Joe’s Les Paul into his 70’s Fender Bassman Ten 4×10 combo, and a Telecaster into a super-modded Sovtek Mig-60 with a 2×12 cabinet loaded with Celestion Vintage 30s.
(Preview the new Ultrasphinx record here: http://ultrasphinx.bandcamp.com/.)