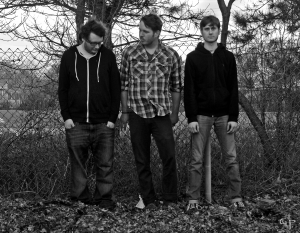 Ohio’s Ultrasphinx, which features former and sometimes members of The Party of Helicopters, The Man I Fell In Love With and Obnox, play crescendo-building, dazzling rock music that is a combination of sounds from metal, to shoegazer, to good ole indie rock.  The band dropped a stellar self-titled LP in Spring 2014, recorded over a span of several months following their 2013 Midwest/East Coast tour by the Black Keys/Cage The Elephant FOH engineer Jason M. Tarulli and engineer Ben Vehorn (Strand of Oaks, Royal Bangs, Drummer, the Black Swans).
Ghettoblaster recently caught up with Ultrasphinx bassist Aaron Rogers to chat about his favorite releases of the year. This is what he told us he was into.
Here’s my top ten, in no particular order:
Sinoia Caves, Beyond the Black Rainbow OST
Horror synth soundscapes from Black Mountain’s synthesist/keyboardist. Total John Carpenter vibes.
The Budos Band, Burnt Offering
It’s heavy and it’s funky. Afrobeat horns meet transistor organs and heavy fuzzed out riffs.
Shellac, Dude Incredible
It sounds like Shellac. Extra points for consistency.
Obnox, Louder Space
Probably my #1 record of 2014. Bim somehow manages to combine all these well-worn influences into a cohesive album without indulging a single cliché. And it’s filthy. This is the next level.
Owls,Two
It’s refreshing to hear the Kinsella clan branch out into more rockin’ territory on this one without dumbing it down.
Big Business, Battlefields Forever
The ‘Biz has riffs for days. Cool vocal arrangements on here, too.
Kill The Hippies, You Will Live With Us Forever
KTH started the same year I started kindergarten and they’re STILL the best punk band in Ohio, and one of only two or three live bands to ever intimidate me from the sheer ferocity of their performance. Granted, I was like, 14 when that happened.
Strand of Oaks, Heal
Tim covers a lot of ground on this record – it’s got everything from synth-pop jams, to Neil Young/Magnolia Electric Co. rockers, and he even out-Springsteens the Boss, but it’s all completely convincing. Guitar solo of the year: J. Mascis on “Goshen ’97.”
Relaxer, Lasers
Relaxer is kinda like our buddy band in Akron. All the guys in Relaxer shred, and if Jamie Stillman is playing guitar on a record, I’m going to buy it. End of story.
Chris Butler, Easy Life
Chris played in Tin Huey and the Waitresses, a couple of well-respected Akron bands, and his new record is a concept album chronicling April 30th – May 4th, 1970 in Kent, Ohio, from Nixon’s invasion of Cambodia, through the Kent State shootings. Some of the songs are new, and some are reworkings of Tin Huey and Waitresses songs, but basically what Chris did is he went through his musical archive and compiled these songs to construct a narrative centered on the KSU campus life during those five days. On its own, it’s a great power-pop record, but in this formation, I think it’s also an important historical document. It’s the first record to give me goosebumps in years.
Honorable mentions:
Aphex Twin, Syro
Unwound box sets on Numero Group
Trans Am, Volume X
(Visit Ultrasphinx here: https://www.facebook.com/ultrasphinx.)